Islam will no longer govern some aspects of personal law in the UAE. This development could begin a sea change, making the Gulf a more tolerant place for westerners and the fledgling Jewish minority. Times Now digital reports:
The United Arab Emirates’ (UAE’s) move to overhaul its Islamic personal laws is part of a larger trajectory of the Middle Eastern country that is seeking to become more liberal and attract more Western tourists and businesses. 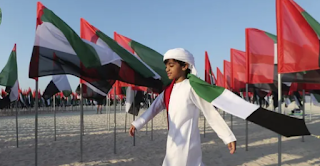 Small Emirati boy walking among flags (Photo: AP)
The weekend announcements to expand personal freedoms will loosen restrictions on alcohol consumption, allow unmarried couple to live together and criminalise “honour killings”. The implementation of such laws has triggered controversies in the past in a country where a vast majority of residents are expats. According to the UAE’s government-controlled news agency, the reforms will “consolidate the UAE’s principles of tolerance” and bolster its social and economic image.
Penalties for consuming alcohol and its sale and possession for those above the age of 21 have been done away with. Though alcohol was available in clubs and bars, there were several restrictions governing its transport, purchase and storage at home.
“Cohabitation of unmarried couples” will no longer be a crime. Attempt to suicide has been decriminalised. Also, the notorious set of tribal custom laws governing so-called “honour crimes” will be scrapped in a step to enhance women’s rights. Under the existing laws, a male relative who assaulted a woman could escape prosecution if she was deemed to have brought ‘dishonour’ to the family.
Read article in full
Posted by bataween at Sunday, November 15, 2020