Update: 15,000 institutions and individuals signed up to the Mass Kaddish this year, a record.
This weekend, many synagogues around the world will be reciting kaddish for Jews  buried in inaccessible cemeteries in Arab lands. Writing in the Jerusalem Post, Ashley Perry describes how the initiative was born, and its unlikely link with a 1947 beauty queen: 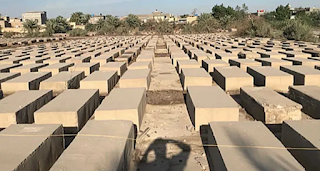 Jewish cemetery, Sadr city, Baghdad
Many will remember how in 2017 Miss Iraq Sarah Idan was forced out of her country after sharing a photograph on social media of her posing at that year’s Miss Universe contest in Las Vegas with Israel’s representative. Idan was ostracized in her country but became an international cause célèbre, invited to speak by many Jewish and Zionist organizations, including at the United Nations.
However, this unique turn of events had many other ramifications that could not be foreseen. As a result of this episode, the person (whose name cannot be published due to death threats) who ran the Miss Iraq contest lost their government funding and sponsorships and went looking for other sources of revenue. He learned that the first-ever Miss Iraq was a Jewish woman named Renée Dangoor, who was crowned in 1947 in Baghdad, and her son, David Dangoor, is a prominent philanthropist and businessman living in London.
Reaching out to the global Jewish Iraqi community around the Diaspora looking for Renée’s son, the pageant owner stumbled upon Sass Peress, an Iraqi Jew who lives in Montreal and a relative of Dangoor’s. Peress agreed to help but asked him for a favor in return for the contact. Peress asked if he knew a certain cemetery in Baghdad where his paternal grandfather was buried, although lacking the exact location.
Within 72 hours, Peress was sent a picture of his grandfather’s grave in Sadr City. When he saw that the grave and others in the cemetery were in such dire condition, he asked the Iraqi to record for posterity as many of the names on other graves as possible. Then came the sad realization that Peress would probably never be able to stand over his ancestors’ graves and recite the mourners’ Kaddish.
Not just him, but few of the almost one million Jews, and their descendants, who fled or were pushed out of Arab countries during the last century would be able to visit or tend to their family’s graves. Peress decided that he would organize a few local synagogues to say a mass Kaddish prayer on the Shabbat closest to November 30, which due to a law passed in the Knesset in 2014, is officially the Day of Commemoration to Mark the Departure and Expulsion of Jews from the Arab Countries and Iran.
He found that many Jews from the Middle East and North Africa had similar stories to his – and worse – with many cemeteries in the region either completely destroyed or in a high level of neglect and disrepair.
Read article in full
Mass kaddish will show religious solidarity with exodus
Mass kaddish will  honour Jews buried in Arab lands
Posted by bataween at Sunday, November 29, 2020