'The Jews are our dogs' heard in Jerusalem's Old City

'The slogan 'The Jews are our dogs' is back - this time chanted by Palestinian boys in Jerusalem's Old City. This dehumanising age-old cry recalls that Jews are worthy of contempt and must submit to Muslims. The Jewish Voice tells us that a Palestinian named Mohammed Nashwan recorded the incident on video and posted it on Twitter.  It is disheartening evidence that the old bigotry remains. 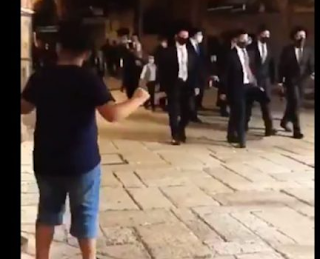 Screenshot from vdeo posted on Twitter showing Arab youths jeering at a group of hasidim.
A video posted on Twitter has showed young Arab children taunting and insulting Jewish worshippers as they walked through the Old City of Jerusalem.
The video showed a group of at least four young Arab boys calling in Arabic “Palestine in Ladna” and “Elihud Kilbana,” “Palestine [is] our land” and “the Jews our dogs,” as a group of about 16 Jewish men walked by, some of them holding the hands of small children or carrying them in their arms.
The Jews were dressed in traditional black suits and hasidic outfits and appeared to be heading to sabbath prayers at the Western Wall on Friday evening, Channel 20 news reported. The group was walking past stores on Hagai Street in the Old City and that adults joined in the shouting of profanities.
Read article in full
More about 'Jews are our dogs'
Posted by bataween at Monday, November 09, 2020

I am not surprised to read this article. I grew up in Beirut, Lebanon & were always threatened by this saying.
(The Jews are our dogs & Palestine is our country) . Every Friday after the prayers at the surrounding mosques, big groups will march down towards our Jewish neighborhood & chant this slogan.
I guess nothing has changed in the last 70 years!!
That’s Growing up Jewish in an Arab land!
Batia .


"A video of the Mississauga rally, first exposed by the Jerusalem Center for Public Affairs, shows attendees chanting in Arabic: “Palestine is our country, and the Jews are our dogs!” Later in the same video, protesters promise to “sacrifice our soul and blood for Palestine” and proclaim that “martyrs by the millions march to Jerusalem.”

The Old Cry of the Pogram against Jews in the Land of Israel....1920..1923..1929.....as the saying goes...The more things seem to change...the more things NEVER CHANGE....Remember Jabotinsky warning..JEWS DEFEND YOURSELVES.....Remember...O Remember