The inexorable triumph of 'ethnic simplification'

In the week in which the flight of Jews from Arab countries is being remembered, the term 'ethnic simplification' springs to mind. It's an ongoing process that has included massacres, discrimination and national homogenisation following the dissolution of empires. Lyn Julius writes in JNS News: 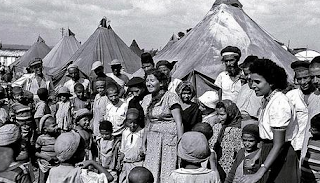 Jewish refugees from Yemen in a ma'abara in Israel

Earlier this year, a Jewish man, Saad al-Nati, his disabled mother and three daughters were forced to leave their home in Amran province, Yemen. The family had been harassed by the fundamentalist, Iranian-backed Houthis whose slogan is 'convert or die'.  Saeed was jailed  but was released after promising to sell his home. He was offered asylum by the United Arab Emirates, which was about to sign a peace deal with Israel.

The departure of the Al-Nati family leaves just five Jews  - an old woman, her crazed brother and three others - in Amran province. There are 33 Jews still living in the capital San'aa.

The  cleansing of Yemen of its Jews is almost complete, from a population of 55,000 we now have 38. This pattern has been repeated across the Middle East and North Africa . Of almost one million Jews  in the Arab world in 1948, barely 4,000 remain.

This month has been declared Mizrahi Remembrance Month. The initiative comes not a minute too soon to recall the exodus of 850,000 Jewish refugees from the Arab world in barely a generation. The expulsion of the Jews is seen increasingly in the context of the plight of other MENA minorities - Copts, Assyrian and Palestinian Christians, Bahai's and Yazidis, persecuted or driven from the region.

What is the solution?  Greater education? Enshrining minority rights into a country's constitution?

Even if the comparison is not made as often as it shoud be, the Arab-Israeli conflict produced an exchange of populations between Jews and Palestinians not dissimilar to the exchanges produced by other 20th century conflicts.The Indo-Pakistan conflict displaced 14 million Muslim and Hindus.  In the post -WWI Greek-Turkish conflict one-and a half million Greeks and half a million Muslims swapped places.

These exchanges were part of a process that the American social and political theorist Jeff Weintraub calls 'ethnic simplification'.

This a hugely euphemistic term for what has included massacre (eg Armenians and Assyrians by Turks)  discrimination (Christians and other religious minorities are ground down to the extent that they have no choice but to flee), the redrawing of boundaries and a process of national homogenisation following the dissolution of empires:  the Austro-Hungarian empire no less than the Ottoman empire. Thus Poland has divested itself of 30 percent of its non-Poles - Germans, Jews, Russians. Now  97 percent of the country is Polish and Catholic.

In 1900 the Ottoman port of Smyrna (Izmir) hosted a motley population of Turks, Arabs, Greeks, Armenians and Jews. Today the city is 100 percent Turkish.

Nowhere is 'ethnic simplification' more pervasive than in the Middle East. The Christian population continues to shrink, while tribal and religious strife has ravaged countries like Syria and Iraq.

Some people look wistfully back to the 'coexistence' prevalent in the Ottoman empire. Weintraub calls  Ottoman coexistence  'despotic multiculturalism'.

But the system, says Weintraub, is built on a protection racket: minorities are forced to pay for protection, while the ruler holds the ring between different sects. Sometimes the ruler throws a minority to the wolves.The system is difficult to maintain in the face of mass mobilisation movements.When it breaks down, a minority finds itself without rights and vulnerable to other groups, usually motivated by fear,  who act violently towards it.

Ethnic nationalism, ironically founded in the Arab world by Christians, was a movement intended to cut across religious and sectarian lines and build loyalty to an over-arching identity. But it failed and has been replaced by forms of theocracy.

It is difficult to see how such a culture might emerge in the Middle East in the near future. The UAE is taking baby steps towards liberalisation and de-Islamisation. But for the Jews of Yemen, it will be too late.

Posted by bataween at Wednesday, November 25, 2020