Book review: who colonised whom and when will we care?

Nina Lichtenstein is an independent scholar and author of Sephardic Women's Voices. Here she reviews Uprooted by Lyn Julius in Sephardic Horizons (Fall, 2020). The Jewish exodus from Muslim lands  and the flight of Palestinian refugees  constitute an unfinished population exchange, Julus argues, and Jewish rights have yet to be addressed. 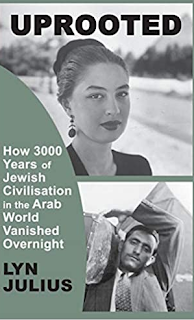