Synagogues, communities and individuals are being urged to recite the memorial prayers or Kaddish for Jews buried in inaccessible Arab lands. The Kaddish is necessary in order to show religious solidarity for the exodus, writes David A Dangoor in JNS News:
Whole communities of almost 1 million Jews, living in these areas for millennia, were emptied within a few short decades, with very little left of their presence or existence. Thanks to organizations like Diarna, The Geo-Museum of North African and Middle Eastern Jewish Life, many of us can see our former homes and communities, albeit virtually.
The few who manage to see them in person, such as like Libyan Jewish exile David Gerbi, risk life and limb. Gerbi returned to see his family’s synagogue in Tripoli 44 years after they fled, and almost paid with his life. 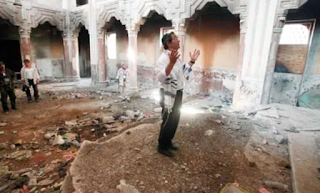 David Gerbi praying in the Dar al-Bishi synagogue in Tripoli before he was thrown out of Libya (Photo: Reuters)
While there briefly to clean up the prayer hall and say a few prayers, angry crowds formed around him. They told me that if I am not leaving now, they are going to come and they are going to kill me because they don’t want Jews here,” said Gerbi, who was then whisked away by hired security guards.
This is the sad reality for many of us, although we have hope that the Abraham Accords could usher in a new era of rapprochement between Jews and Arabs in the region. Nonetheless, before we are able to push these issues with our neighbors, there needs to be greater understanding, awareness and displays of solidarity within the Jewish world.
For many years, the history and exodus of the Jews from the Middle East and North Africa were barely recognized or remembered by Jewish institutions, synagogues, schools and organizations in Israel and around the world.
While the majority of Jews in Israel and around 1 million Jews in the Diaspora are from the Middle East and North Africa, there needs to be a greater sense of awareness of the history, culture and tradition of these communities.
Unlike the case of other Jewish tragedies, there is no communal showing of religious solidarity for the exodus and expulsion of Jews from Arab countries. It is vital, thus, that this be a widely recognized initiative to say these prayers annually in synagogues and Jewish institutions in Israel and around the world.
Even in communities where there are few Jews from the Middle East and North Africa, these prayers and a display of religious solidarity are vital for breaking down the barriers between our different communities.
To sign up and download the prayer, please go to www.KaddishInitiative.com.
Read article in full
Mass Kaddish planned for 28 November (Jewish News)
More about the mass Kaddish
Posted by bataween at Monday, November 16, 2020