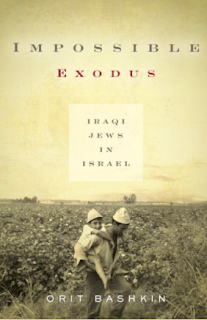 In her 2017 book, Impossible Exodus, Orit Bashkin paints a bleak picture of the difficulties encountered by Iraqi Jews arriving in the tent camps of the 1950s. But this was, by and large, an educated and adaptable  urban population, unlike the Moroccan Jews who arrived in the 1960s. It is a pity that Bashkin, infected by the language of identity politics,  cannot resist depicting Iraqi Jewish refugees, as is the fashion,   as victims of 'Ashkenazi elites' in Israel.
This ideal of Aliyah contrasted sharply with the realities in Mandatory Palestine and Israel. As Aziza Khazzoom has shown, each wave of Jewish migrants to Palestine and Israel othered and orientalized the next generation of migrants.However, the Jews who had lived in Palestine before 1948 , namely the members of the old Sephardic community and especially European Zionists, shared certain formative experiences.
The insightful scholarship of Michelle Campos and Abigail Jacobson has underlined the differences between the Ashkenazi and Sephardi communities in Ottoman and Mandatory Palestine.However, for both communities, the years of the national Palestinian revolt (1936–39), the years of the Holocaust, in which many Ashkenazi Zionists lost their entire families in Europe, and during which many Jews denied entry to Palestine by the British perished in Europe, and the 1948 War, in which one percent of the Jewish population in Mandatory Palestine was killed, were crucial in shaping their collective mentality and their ideological commitments.
The members of the yishuv hus looked differently at the new waves of migrants who arrived in the state of Israel after 1948, who included Holocaust survivors (labeled plitim, “refugees,” in state discourse), Jews from Romania and Bulgaria, and Jews from Middle Eastern countries. Despite the property taken from the Palestinian population during the 1948 War, support from international Jewish organizations, and financial compensation from Germany, the state of Israel, which demanded that each and every Jew make his or her way to the Jewish homeland, did not have sufficient financial resources to absorb such masses of people and provide them with housing, employment, instruction in Hebrew, and basic social services.
Although many members of the yishuv helped the newcomers in important ways (often by volunteering), the former also felt superior to the latter, who, the former felt, did not come to Israel out of ideological commitment, as had the previous Zionist migrants, but rather out of necessity.
Read article in full
Posted by bataween at Sunday, November 08, 2020

Scanning the article in full., I immediately read... Arabs of Palestine are displaced,,,,European Jews are refugees, the Mizrahim are "migrants."
Just the choice of descriptive words betrays this out look of the writer. Were they "migrants" are were they both displaced and refugees?

Israel made mistakes, I'm sure of that....but there is code of terminology which betrays the political orientation of the writer.