As the day to remember the exodus of Jewish refugees from Arab countries approaches (30 November) James Sinkinson writes  in Israel National News that the ethnic cleansing has to be acknowledged (with thanks: Imre, Yoram): 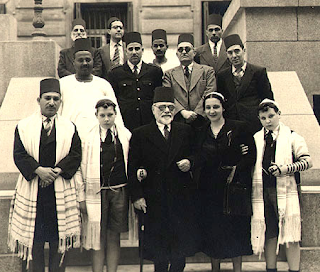 The crux of this conflict—and the reluctance of media and international bodies to address it—has always been about recognizing the Jews as a nation who reconstituted national sovereignty in their indigenous and ancestral homeland.
The attacks and ethnic cleansing of Jews in Arab countries was one of the most egregious examples of the violent rejectionism of Jewish human rights by Arab leaders. While some measures—like the Clinton Parameters, guidelines for an end to the conflict presented by then-President Bill Clinton in 2000—did refer to an international fund for both Arab and Jewish refugees displaced by the conflict, the issue remains on the sidelines.
Ideas such as an international compensation fund, or one funded by Arab countries that expelled the Jews, or the proposal for one refugee crisis to annul the other, have all been raised at one point or another.
Regardless, in order for the Israel-Arab conflict—including the Israel-Palestinian conflict—to be resolved, the crime of ethnic cleansing of Jews has to be acknowledged. Then generous redress must be demanded and granted.
Read article in full