Update:Arab news reports falsely stated that al-Zayani’s sit-down with Prime Minister Benjamin Netanyahu was in Tel Aviv, when it took place in Jerusalem. (Times of Israel - with thanks: Edna)
Two Bahraini ministers will today head the first official delegation from the Gulf kingdom to Israel.
The Times of Israel reports (via HonestReporting): 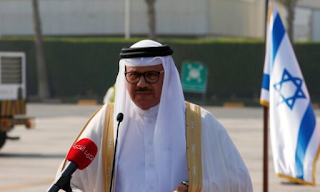 Bahraini Foreign Minister Abdullatif al-Zayani delivers a statement upon the arrival of a US-Israeli delegation in the Bahrain International Airport on October 18, 2020. (RONEN ZVULUN / POOL / AFP)
During the visit, a trilateral meeting is slated to be held between Prime Minister Benjamin Netanyahu, US Secretary of State Mike Pompeo and Bahraini Foreign Minister Abdullatif bin Rashid Al- Zayani. Israeli officials are reportedly working to finalize an aviation agreement for direct flights between Tel Aviv and Manama so it can be signed at the meeting, and are also expected to discuss opening embassies and exchanging ambassadors.
Earlier this week, the Israeli cabinet voted unanimously to ratify the “Joint Communiqué on the establishment of diplomatic, peaceful, and friendly relations” with the Kingdom of Bahrain, concluding a formal process that began roughly two months ago.
Read article in full
Posted by bataween at Wednesday, November 18, 2020

Email ThisBlogThis!Share to TwitterShare to FacebookShare to Pinterest
Labels: Israel/Bahrain