A sad reminder that a peace agreement does not necessarily mean an end to popular hostility and ostracism. The victim here is Egyptian actor Mohamed Ramadan, who found himself under fire for taking a photo with Israeli singer Omer Adam in the United Arab Emirates. The Times of Israel reports: 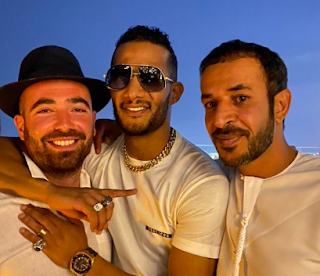 Egyptian actor Mohamed Ramadan with his arm around Israeli singer Omer Adam
Egyptian actor Mohamed Ramadan came under fire over the weekend after an Emirati journalist posted a photo of the star embracing Israeli singer Omer Adam during a trip to the United Arab Emirates.
The picture gained further traction when it was retweeted by the State of Israel’s Arabic Twitter account under the caption “Art brings us together".
According to reports, the photo was initially posted by Emirati journalist Hamad Al Mazrouei on his Twitter account, captioning the shot: “The most famous artist in Egypt with the most famous artist in Israel, Dubai brings us together.”
However he later deleted the picture as outrage grew.
Read article in full
Nervana Mahmoud in al-Hurra (Elder of Ziyon)
Posted by bataween at Saturday, November 28, 2020