US pressures Sudan to 'normalise' relations with Israel

Washington has given Sudanese leaders a 24-hour deadline to decide whether they agree to a deal that will see the country normalize relations with Israel in exchange for financial aid and removal from a US blacklist of state sponsors of terror, according to several reports in Arabic-language media. The Times of Israel takes up the story: 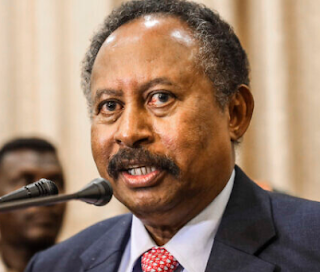 Sudanese Prime Minister Abdullah Hamdok: opposed to normalisation
CNN Arabic and Dubai-based Asharq News both reported the American deadline, citing unnamed high-ranking Sudanese government officials, and said government leaders met for long hours to weigh the offer. The veracity of the reports could not be immediately confirmed.
According to Asharq, Prime Minister Abdullah Hamdok remained opposed to linking normalization with the American deal.
There have been consistent reports of a serious split between the military and civilian players in Sudan’s fragile transitional government, with Hamdok against normalization at this time, while military head of state Gen. Abdel Fattah al-Burhan favors it.
Hamdok has said that the transitional government did not have a mandate to normalize with Israel. The US has led efforts to pressure Sudan into normalizing ties with Israel. Khartoum’s position on the terror blacklist subjects it to crippling economic sanctions.
Read article in full
Posted by bataween at Sunday, October 18, 2020

you can't force a country to normalize relations with another. that'll just make things worse for everyone involved.

Sudan has no Jews Judenfrei