UAE foreign minister pays homage to the Holocaust in Berlin

A UAE delegation visited the Holocaust Memorial in Berlin this week, Accompanied by senior Israeli and German ministers, the UAE foreign minister wrote 'never again' in the visitors' book. While it is paramount for the UAE to begin its new peaceful relationship with Israel by paying homage to the Holocaust, it is to be hoped that Israel should also introduce the Arab Emirates to the victims of Arab and Muslim antisemitism - the 850,000 Jews made refugees from Arab and Muslim countries.
“A whole group of humanity fell victim to those calling for extremism and hatred,” United Arab Emirates Foreign Minister Abdullah bin Zayed al-Nahyan  wrote, adding that the visit to the memorial “underscored the importance of human values such as coexistence, tolerance and accepting the other… as well as respect for all creeds and faiths. These are the values upon which my country was founded.”
Ashkenazi looked forward in his message saying the meeting “symbolizes the beginning of a new era. An era of peace between peoples. Our joint signature in the book of remembrance is like a shared cry and oath: to remember and not to forget, to be strong and to promise ‘never again.'” 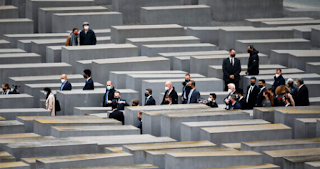 The visitors at the Holocaust Memorial in Berlin (Photo: AP)
During the tour, German Foreign Minister Heiko Maas told Al Nahyan that Ashkenazi was the child of Holocaust survivors, Israel’s Foreign Ministry said. “The Emirati minister was surprised to hear this and asked to hear more,” the ministry said. “Minister Ashkenazi told him of his roots and his father who survived a labor camp in Bulgaria in 1944 and about his immigration to Israel,” it added.
Accompanied by Maas, the pair walked through the somber monument, a vast undulating labyrinth of more than 2,700 gray concrete blocks spread over an area equivalent to three football fields. United Arab Emirates Foreign Minister Abdullah bin Zayed al-Nahyan is seated for a lunch in the State Dining Room of the White House after a signing ceremony for the Abraham Accords on the South Lawn of the White House, September 15, 2020, in Washington.
It commemorates the slaughter of six million Jews by Adolf Hitler’s Nazi regime. Speaking at a press conference with the Israeli and Emirati foreign ministers later in the day, Maas said their willingness to meet in Berlin and tour the Holocaust memorial together “shows how serious you are in your efforts for good bilateral relations.” “This shows that peaceful coexistence in the Middle East is possible,” he said.
Read article in full
Posted by bataween at Friday, October 09, 2020