Recent photos taken at Ezekiel's tomb at Kifl, south of Baghdad, reveal further changes designed to alter its Jewish character. In the last five years, major works have been undertaken by the Wakf to transform the site into a huge Shi'ite mosque. Now the synagogue adjoining the burial chamber is being redeveloped. (With thanks: Kobi) 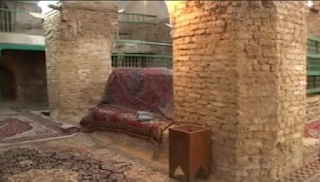 This old photo of the synagogue adjoining the burial chamber shows the raised reading platform (Teba) and the gallery, now dismantled. The Teba was unusually located on the eastern side of the synagogue and not in the centre of the hall or next to the ark, as was customary in synagogues in Iraq.
The photos below show that the balustrade around the Teba, or reading platform, has been removed. 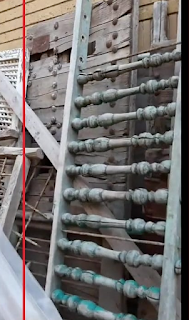 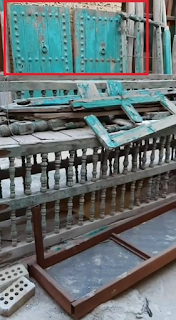 The columns holding up the women's gallery have also been taken down, as well as the guard rail around the gallery. 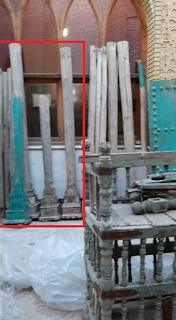 The iron stud doors in the northern wall  leading to the burial chamber have also been removed. 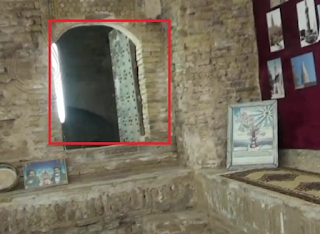 Israeli journalist Tsur Shezaf visited Ezekiel's tomb in 2010, when it was still intact. At 5:15 you can see shots of the synagogue. The ark and prayer books have long ago vanished from the synagogue.
According to 'Tombs of saints and synagogues in Babylonia' by Zvi Yehuda, the synagogue beside Ezekiel's tomb was the only synagogue serving the local community of Kifl, which numbered about 300 people. Daily services were held and during the Days of Awe between Rosh Hashana and Yom Kippur a hazan (cantor) from Baghdad was hired to lead the serivces.
During the 1930s, Rabbi Ishaq Salih Mukammal attended from Baghdad. He was given a place at the teba alongside the community notables. At the time of the pilgrimage during Shavu'oth, the synagogue was filled with celebrating worshippers. The pilgrims passed through the synagogue on their way to visit the 'inner yard' to prostrate themselves on the prophet's tomb. Pilgrims lit candles to commemorate the souls of the departed in the synagogue.
Posted by bataween at Tuesday, October 20, 2020

The last four jews of Iraq..go up to Israel...and live