The return to Iraq from the US of the Ba'ath Party archives raises fears that the Iraqi-Jewish archive will also be returned, but the two cases are not at all similar, argues Lyn Julius in JNS News.
(October 12, 2020 / JNS) On Aug. 31, 2020, a stash of documents belonging to the era of dictator Saddam Hussein was quietly returned to Iraq. They were the Ba’ath party archives, comprising up to eight million documents and weighing 48 tons.
The stash was first discovered shortly after the 2003 invasion of Iraq. The documents contained the highly sensitive list of names of thousands of officials of the Ba’ath party, the ultra-nationalists governing Iraq since the 1960s; party apparatchiks who were responsible for oiling the wheels of Iraq’s ruthless regime and “disappearing” dissidents.
Soon after their discovery the documents were stored in the Baghdad home of opposition figure Kanan Makiya. But security threats made it so difficult to ensure their preservation that in 2005 Makiya persuaded the Americans to ship the archive to the United States. The files were stored at the Hoover Institute, the Conservative think tank housed at Stanford University. They were digitized and made available to U.S. researchers.
The return of the Ba’ath party archives has raised fears among U.S. Jewish groups that it sets a bad precedent for the Iraqi Jewish archive (IJA). This collection of thousands of Jewish documents, religious books and Torah scrolls, together with random communal and personal correspondence, was seized by Saddam’s henchmen from a Baghdad synagogue in the 1980s. It was miraculously rediscovered in 2003 and sent for restoration to the United States.
But the U.S. government signed an agreement at the time promising its return to Iraq, without stopping to inquire to whom the archive belonged or how it came to be languishing in the flooded basement of the secret police headquarters. Following a series of postponements and extensions—the latest till 2021—the U.S. State Department appears determined to return the IJA to Iraq, come what may. 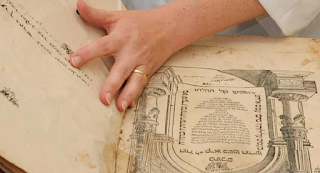 One of the oldest artefacts from the Iraqi Jewish Archive
The whereabouts of the Ba’ath party archives have not been disclosed, as there is a risk that access to the files might result in attacks or ugly personal vendettas. Nevertheless, there is a general consensus that the Ba’ath documents constitute Iraq’s national heritage and belong in Iraq, where they might be consulted by Iraqi researchers. A first batch was returned to Iraq in 2013.
In contrast, the Iraqi-Jewish archive is of primary interest to Iraqi Jews. It is the stolen property of a community that was persecuted and driven into exile. Indeed only four Iraqi Jews remain in the country. With most Iraqi Jews and their descendants now living in Israel, Iraq’s sworn enemy, the archive would be inaccessible to Israeli visitors or researchers. Neither, despite official assurances, would Iraq be able to guarantee the archive’s proper preservation and security.
Not all the thousands of documents and fragments have been digitized, and it is doubtful, had they been shipped to Iraq, if recently-deciphered handwritten notes of famous 19th century rabbi the Ben Ish Hai, would have been found, transcribed and printed in two volumes of sermons or drashot.
The difference between the Ba’ath papers and the Jewish archives is well noted by Gina Waldman, president of the California-based organization Jews Indigenous to the Middle East and North Africa (JIMENA:).”We, the Iraqi Jews, are glad to see that the archives of the Ba’ath party have been returned to their rightful owners: The people of Iraq. They are an essential part of their heritage and history, even the darkest chapters—this is why the Iraqi Jewish archives need to also be returned to their rightful owners: the Jews of Iraq, who no longer live in Iraq. ”
The Hague Convention of 1954 protects the cultural property of peoples rather than states or territories, but nonetheless, the zeitgeist treats postcolonial states as the custodians of their cultural heritage, without paying much heed to the rights of persecuted minorities. Indeed the U.S. State Department has been signing dozens of Memoranda of Understanding (MOUs) with Arab states, legitimizing the seizure of cultural property from exiled Jews and others—a trend which JIMENA is fighting with vigor.
Jewish groups have gained the bilateral support of congressmen in their campaign to keep the Iraqi Jewish archive in the United States. Nonetheless, their options are limited. The U.S. government’s credibility could be undermined if the claimants went to law. That’s why Carole Basri, whose family has a private claim to hundreds of IJA documents, prefers a more subtle approach: she has recently made a film explaining why the archive matters to Iraqi Jews personally, to their children and grandchildren.
If the archive is shipped back to Iraq, she declares, “There will be little hard evidence for the community to prove they ever existed in Iraq and certainly nothing to cling to for future generations.”
Moreover, Article 17 of the Universal Declaration of Human Rights states that no individual or community should be arbitrarily deprived of their property. It would be a travesty indeed if the injustice of the Jewish community’s ethnic cleansing from Iraq were compounded by a second injustice, dispossessing it of what rightfully belongs to it.
Read article in full
Posted by bataween at Wednesday, October 14, 2020