Libyan Jews fleeing after WW2 not recognised as refugees

It is a fact that 90 percent of the Jewish community of Libya emigrated to Israel after the end of WW2, but how many know that, until emigration became legal,  hundreds of Libyan Jews passed through Italian Displaced Persons (DP)  camps,  intending to make it to Israel?

These Jews, some mere teenagers, had suffered through privation and even internment during WW2. They were the survivors of labour camps such as the notorious Giado camp, south west of Tripoli, where 600 Jews died of typhus or starvation. They had also survived pogroms - some 130 Jews died  in the November 1945 Tripoli pogrom. To add insult to injury, another pogrom was to break out in June 1948. 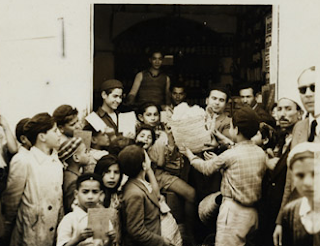 An Anglo-Arab regime controlled Libya  until independence in 1951. The administration would not let Jews leave.  Emigration was only legalised in January 1949. Those desperate enough were smuggled across the Mediterranean in overcrowded boats from September 1948. Some  1,300 made it to Israel via Italy between 1947 and 1949.

According to Danielle Willard-Kyle (21.30 into the video) who has made a study of the inmates of the DP camps, an additional complication is that many fleeing Libyan Jews did not have citizenship, or had been stripped of their citizenship. Arriving in the DP camps, some pretended to have Eastern European citizenship.

The international community, in the shape of the International Refugee Organisation (IRO), which had been set up to deal with the massive postwar refugee crisis,  callously refused to recognise  Libyan escapees as refugees. The IRO  went so far as to claim that they were economic migrants. They would therefore not be eligible for asylum benefits.

The American Joint Distribution Committee, which cared for the humanitarian needs of Jews,  insisted that those who had made it to Italy were bona fide refugees. But the IRO argued that if they helped the Jews, they would have to help the Arab refugees fleeing from Palestine. If the Joint had not intervened, these Jews would have been repatriated to Libya, not allowed to continue their journey to Palestine.

The Arab problem was soon dealt with by the creation of UNWRA, dedicated to this day, to helping Palestnian 'refugees. The case of the Libyan Jews in DP camps seems to be the perfect example of an international double standard when it comes to Jewish refugees.

Email ThisBlogThis!Share to TwitterShare to FacebookShare to Pinterest
Labels: Holocaust in Arab and Muslim lands, Jewish refugees/Libya, Jews of Libya


Joseph Romano, one of the Israeli Athletes, killed in Munich Olympics in 1972, was a Libyan Jew.