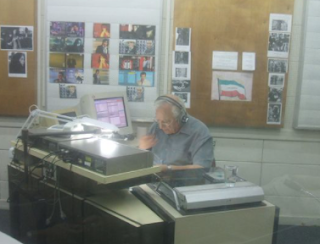 Kol Yisrael studio broadcasting in Persian
Israel radio Arabic and Persian-language services have broadcast extensively to Arab countries and Iran for decades. The clandestine radio broadcasts of Kol Yisrael in Arabic were listened to by a great many Jews living in Arab countries - and  not only Jews. In time of war or crisis  the news coming from Israel was trusted, whereas Arabic radio stations could not be relied on to tell the truth.
Oddill Dallall, whose husband was hanged by the Iraqi regime on trumped up spying charges, remembers the atmosphere in Baghdad at the time of the June 1967 Six-Day War. "All the shops and offices were closed and Jews and Arabs alike were rushing to get home safely. During the war we sat in a closed room to hear the news from Israel in Arabic, which we kept very low. But in fact if you went into the street you could hear the same broadcast playing loudly from homes of Muslims and Christians.

"Many of them listened to the news from Israel because they would hear the real story, not the propaganda and lies that the media in the Arab countries spew out. Radio Baghdad boasted about so-called victories over Israel - fictitious. Even after Israel's victory, Radio Baghdad continued to broadcast the lies and didn't even mention the Arab defeat."

Edna Anzarut Turner, whose family fled Egypt in 1956,  recalls:  "I still remember the signature tune and the words in Arabic حنا محتة ال اسراىلً : 'This is the Voice of Israel.'

"The statics were crackling loudly, and my father and grandfather had their ears literally an inch away from the radio.
"I recall, as a little girl in Alexandria, the moment my parents and grandparents learnt about the public hangings in Iraq  ( Five Iraqi Jews were hanged between 1948 and 1952 - ed).
"They would send the servants away on wild goose errands when it was time to listen to Kol Yisrael.  I was always on guard duty outside the room where the radio was.
"I suddenly heard blood curdling yells coming from the room.  I looked inside.  My family had their head in their hands, weeping with horror.
“Ce sont des monstres...ce sont des monstres!” my dad kept repeating.
"My dad insisted that I be told.  I was only a little girl....and although I am now a grandmother, I still remember to this day the terror, the anguish and the despair that spread all over our people in Egypt at the monstrous murder of Jewish Iraqis. What was worse was that crowds of Iraqis watched with delight and cheered as those innocent Jewish men were hanged."
Posted by bataween at Sunday, October 11, 2020

Email ThisBlogThis!Share to TwitterShare to FacebookShare to Pinterest
Labels: Jews of Iraq, Jews of Egypt, Jews of Iran

I would like to find out more about the history of Kol Yisrael's Arabic service. would you know of any resources I could check out?

The information is very patchy in English, Davsil. Salim Fattal z""l used to run it https://www.jweekly.com/2010/09/17/iraqi-born-israeli-broadcast-pioneer-speaks-for-dispossessed/. He brought Egyptian films to Israel and there was an Arabic music orchestra featuring some of the great musicians from Iraq and Egypt. Perhaps you can find out more?