JJAC president Rabbi Abadie to relocate to Dubai from NYC

The appointment  as full-time rabbi in Dubai of Rabbi Elie Abadie, who was forced to leave his native Lebanon as a refugee, shows that the UAE is serious in its intent to 'grow' the local Jewish community, now estimated to have up to 1,500 members. But does his departure  leave vacant the post of President of Justice for Jews from Arab Countries, which advocates for the rights of Jews driven from the Middle East and North Africa? 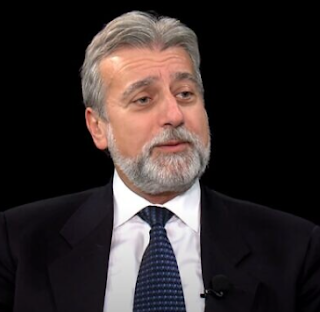 Rabbi Elie Abadie
The small but growing Jewish community of Dubai is getting its second full-time rabbi, the Jewish Council of the Emirates (JCE), one of two Orthodox congregations in the country, announced Friday.
Beirut-born Elie Abadie, a prominent rabbi and scholar of Sephardic Judaism currently living in New York City, will relocate to the Gulf metropolis to serve as the community’s senior rabbi. The JCE is the country’s oldest congregation and the only one recognized by local authorities.
"I feel like I’m coming home to my roots, to the region where I was born, to the language that I first spoke, and to the beautiful traditions and customs with which I grew up,” Abadie said in a statement.
Read article in full
More about Rabbi Abadie
Posted by bataween at Friday, October 16, 2020

Email ThisBlogThis!Share to TwitterShare to FacebookShare to Pinterest
Labels: Jews of Dubai and Gulf states, Jews of Lebanon