Jews have always lived in the Gulf, but in small numbers

With more and more Arabs interested in the history of local Jews in the wake of the historic peace deals between Israel, the UAE and Bahrain, Dr Nimrod Rafaeli  at MEMRI has compiled this useful summary,  based on a book by the Kuwaiti scholar Yusuf Ali Al-Mutairi titled A-yahud fi al-khaleej. (With thanks: Lily) 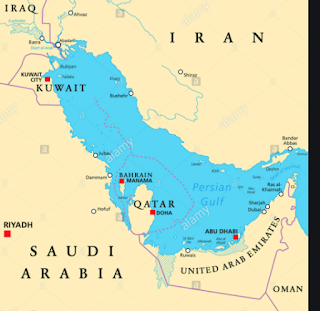 The Origins Of The Jews In The Gulf: Most of the Jews who settled in the Gulf countries, primarily in Kuwait and Bahrain, were of Iraqi origin, and many of them were seeking either to escape military conscription under the Ottoman Empire or to explore economic opportunities. Of these Jews, only a few have remained, likely only in Bahrain where the Jewish population numbers around 70. (Current estimates put the number at no more than 25 - ed)
A member of that community, Huda Nonoo, was her country's ambassador to the U.S. from 2008 to 2013 – making her the first ambassador of the Jewish faith to represent an Arab country.
According to Al-Mutairi, Jews held important positions in Ahsaa (currently in eastern Saudi Arabia), notably the post of treasurer of the Ottoman Empire, which ruled the area through WWI. The post was held by three successive Jews – Yacoub Efendi, 1878-1879; Daoud bin Shintob ("Shintob" being an Arabicization of the Hebrew "Shemtov"), 1879-1894; and Haroun Efendi, 1895-96.[5] During their tenure, many of the entries in the financial books were in Hebrew (most likely in Arabic transliterated in Rashi script, which was commonly used by old-generation Iraqi Jews).
Al-Mutairi suggested that keeping the financial records in Hebrew may have been aimed at preventing an audit of the accounts, possibly to protect their Ottoman superiors. But perhaps the most significant post held by a Jew was that of Director of Customs for the whole province – a highly desirable position sought after by many both inside and outside Ahsaa because of the potential it offered for illicit income.
The Jewish Cemetery In Ahsaa: Not long ago, a Saudi friend of the author of this article mentioned the existence of a Jewish cemetery in Ahsaa. According to this information, the land on which the cemetery was located is largely deserted, and no one has claimed it, although locals continue to refer to it as maqbarat al-yehud – "the Jewish cemetery." Given that only a few Jews lived and died in the area, the cemetery itself could not have been large.
The Jews In Kuwait: The Jews in Kuwait numbered between 100 and 200; they had their own synagogue, called a kanisah. A British diplomat, John Gordon Lorimer, hinted at tensions with the local authorities "chiefly for the distillation of spirituous liquors which some of the Mohammadan [Muslim] population consume secretly in dread of the Sheikh."
A Jewish Official In Muscat, Oman: Jews had been living in Muscat since at least 1625. In 1673, according to one traveler, a synagogue was being built, implying permanence. British officer James Wellsted also noted the existence of a Jewish community when he visited in the 1830s. 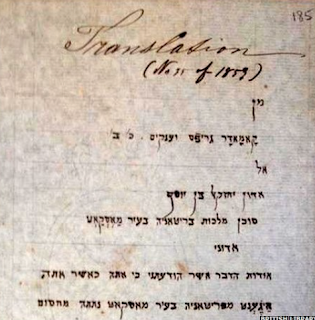 The British had a letter addressed to a Jewish agent in the Gulf translated into Hebrew - presumably so that Arabs would not be able to read it (Photo: British Library)
A fascinating discovery was made not long ago in the British Library: a letter written in 1859 by a British naval officer in the Gulf, Griffith Jenkins, to a subordinate in Muscat named Hezkel ben Yosef, to whom Jenkins refers in the letter as "Agent of British Monarchy." In the letter, Jenkins refers obliquely to the Imam who held sway in Oman's interior and concludes by asking Hezkel to explain the matter in private – and then, interestingly, had the letter translated into Hebrew.
Read article in full
Posted by bataween at Monday, October 12, 2020

Email ThisBlogThis!Share to TwitterShare to FacebookShare to Pinterest
Labels: Jews of Arabia, Jews of Bahrain, Jews of Dubai and Gulf states, Jews of Kuwait