The media are full of the news, at President Trump's prompting,  that Israel and the Sudan are to make peace. But it is not yet a done deal and there is still considerable political and popular opposition to 'normalisation' in Sudan itself. 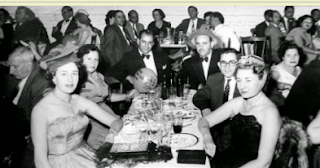 It is unlikely that the former Jews of Sudan were on President Trump's radar, but this seems a fitting moment to remind readers that Sudan once had a thriving community of almost 1,000 In September 2019, the Sudanese government invited Jews to return, promising them full citizens' rights.
Daisy Abboudi, whose grandparents came from the Sudan and who collects information about the Jewish community, says:    I believe the recent moves towards normalisation between Sudan and Israel are a positive step. I had the opportunity to visit Sudan in January 2020, and had a wonderful experience. I hope this normalisation process means that in the future, other members of the former Jewish community of Sudan, and their descendants, will have the same opportunity to visit. "
Unbeknown to many, there was once a community of Jews living in the Sudan. This community, like most living in Arab countries, was dispossessed, driven to extinction in the last 50 years and its descendants dispersed to Israel, France, Switzerland the US.
Prominent figures like Nessim Gaon, who was president of the World Sephardi Federation and his brother- in-law Leon  Tamman, co-chairman of WOJAC, were active in representing the rights of Sephardi and Mizrahi Jews.
But an earlier community, before the arrival of the British, was decimated when Jews were forcibly converted to Islam. The modern community grew and thrived after the British under Lord Kitchener reconquered the Sudan in 1898. The country came under Anglo-Egyptian rule.
More about Jews of Sudan
Posted by bataween at Sunday, October 25, 2020