Jewish groups breathed a sigh of relief after California governor Gavin Newsom vetoed a controversial bill for  a model ethnic studies state school curriculum that would have excluded all ethnic groups except Arab Americans. The Los Angeles Times reports: 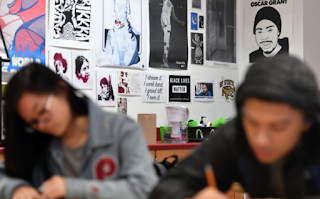 (Photo: LA Times)
In the summer of 2019, state education officials released a first draft of the model curriculum to intense controversy, particularly from Jewish groups, including the California Legislative Jewish Caucus, whose members objected to their lack of inclusion and a perception that the curriculum and sample lesson plans were anti-Semitic.
After a lengthy public comment and revision process, officials issued a new draft in July, which the caucus said “addresses the most critical concerns raised by our community last year.” But when it later became clear that the curriculum would include a sample lesson on Arab Americans, many Jewish and other ethnic groups once again mobilized.
Sarah Levin, executive director of Jews Indigenous to the Middle East and North Africa, said her group supports “high-quality, rigorous ethnic studies” but wants to see the curriculum include “balance in its portrayal” of Middle Eastern communities and “equitable representation” for other groups, such as Iranian Americans, Kurdish Americans, and Mizrahi Jews. She said also that the curriculum should include a lesson plan on anti-Semitism.
“Let’s continue improving this and getting this to the right place where we’re all content and where we all feel like we’re meaningfully included,” she said. Daniel Thigpen, a spokesman for the California Dept. of Education, said it had received at least 9,000 letters from the public on the latest curriculum draft.
Read article in full
Posted by bataween at Wednesday, October 07, 2020

Since when are arab americans the only minority in Californai {excluding Native Americansl Jews; Chinses, japanesem Vietnamise, Thais;????????)

One can safely say the Hp offers top of the line printing solutions, but to enjoy a seamless printing experience you need to install and connect the printer to your computer. If you just bought an HP printer and searching for the 123.hp.com/setup procedure. This short guide will help you take the right steps to make your HP printer operational without any glitches.

Our agency is one of the most elite escort agency that is working and associated with this service for a long time. Not only this, but we are always trying hard to satisfy the clients in the best possible manner. Our client strength is a large one and there are many elite groups of people associated with our agencies.