It's the symbol of a new start for Jews in Dubai: a Succah, or booth, erected in front of Dubai's tallest tower. CBN reports:
JERUSALEM, Israel – Just weeks after signing a historic normalization agreement with Israel the United Arab Emirates erected a public sukkah outside of the world’s tallest tower in Dubai.
The Jewish world is currently celebrating Sukkot, commonly known as the Feast of Tabernacles. During this time, Jews build tents called sukkahs outside their homes, to commemorate the temporary dwellings the Children of Israel lived in during their 40-year journey from Egypt to the promised land.
The public sukkah erected outside of Dubai’s Burj Khalifa tower is the first of its kind and was set up in collaboration with local Jewish and Dubai authorities. 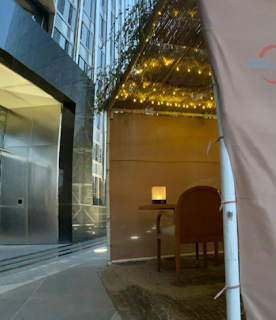