The Druze minister Ayoob Kara, who has special responsibility  for relations between Israel and Arab countries,  has revealed  to the Jerusalem Post that a Bahraini princess' treatment in an Israeli hospital set the ball rolling towards 'normalisation' between Bahrain and Israel ten years later (with thanks: Lily): 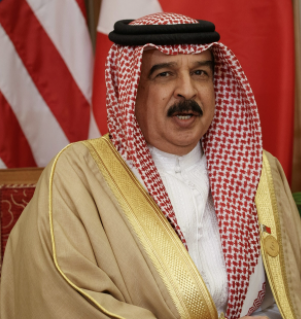 King of Bahrain Hamad bin Isa al-Khalifa
Israel’s treatment of Bahraini princess Fatima bint Khalifa in 2010 helped pave the way for the normalization deal between the two countries a decade later, former communications Minister Ayoub Kara said on Tuesday. “I believed in 2010 that we had an opportunity to [have] good relations with the Gulf states,” Kara said.
He spoke at the second annual Israeli-Palestinian Economic Forum, which was held last year in Jerusalem and was transformed this year into a virtual event. Kara recalled how ten years ago he had helped facilitate the Bahraini princess’ treatment at Haifa’s Rambam Hospital, with an eye to creating an opening for formalized Israeli-Bahraini ties.
“This was the beginning of the process,” he said. The entire incident was “very discreet” known only to the princess, her husband, himself and Prime Minister Benjamin Netanyahu, Kara said. “She was very sick” and believed that she could be treated in Israel, Kara said.
Then upon her release from the hospital Kara helped the couple settle in an Israeli hotel for a month.​ ​Prior to their return to Bahrain, they asked how they could help Israel.​ ​Kara suggested they improve the treatment of the Jewish community in Bahrain. He also asked them to support a new vision of expanded Israeli relations with the Gulf, given that it was impossible to come to a resolution with the Palestinian Authority, Kara recalled. “No way that we will find a solution with them. We need a new policy,” Kara told them.
Read article in full
Posted by bataween at Wednesday, October 28, 2020