The Arab love affair with the Jews, kindled by the recent Abraham Accords between Israel and the UAE and Bahrain, continues with coverage in Arab News, a Saudi news medium, of a photographic exhibition in Paris of Jews in Morocco in ceremonial dress taken in the 1930s. In fact, these are Jews from the Atlas mountains, and the exhibition perpetuates the  romantic,  folk image of the Jew so beloved of the news media. Not a single Jew remains in that region today.
DUBAI: The largest Jewish population that ever existed in the Arab world was in Morocco, which was home to over 250,000 Jews by the 1940s. A free photography exhibition, which runs at the Museum of the Art and History of Judaism (mahJ) in Paris until May next year, offers a rare insight into their lives there.
“Juifs du Maroc” showcases around 60 black-and-white photographs and drawings by the late French photographer and painter Jean Besancenot, who travelled to Morocco several times and became enamored with the culture there. The images on display were photographed between 1934 and 1937. They are both intimate and a documentary-like portrayal of Morocco’s Jewish community — some of men, women and children posing in elaborate attire against a neutral background, others of people practicing daily activities of baking, brewing, and reading.
Overall, the exhibition preserves and presents “a priceless record of rural Jewish communities in Morocco no longer in existence,” according to a statement published by the museum. 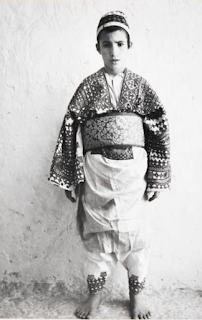 The co-curator of the show, Hannah Assouline discovered by accident that this photograph was of her father, Messoud Assouline, aged 13
Jews of Tinghir
Orwell lives on - at the Jewish Museum
Posted by bataween at Sunday, October 04, 2020