The UAE has a Jewish past, and a promising future

There are ancient relics testifying to a past Jewish community in the Gulf of Arabia, and the peace deal announced between Israel and the UAE may lead to the small expatriate Jewish community having an open and regular presence, the Times of Israel reports:
More than one Jew so, of course, two synagogues: The United Arab Emirates’ modern Jewish community was only formally established in 2008, and it entirely comprises immigrants.
Though small, numbering some 2,000-3,000 people, it is already participating in what could be called a thriving tradition of Jewish debate: Not one, but two organizations have claimed at one point to represent the UAE’s community. Ross Kriel’s Jewish Council of the Emirates in Dubai hosts services at a synagogueknown as “the villa,” a converted residence rented by the community, with a sanctuary, full kitchen, areas for socializing and playing, an outdoor pool, and several rooms upstairs where religiously observant visitors can stay over Shabbat. The villa’s location has been and remains a closely-held secret in an anonymous building — but as tensions relax and Jewish Israelis become a regular presence in the Emirates, it might come out into the open.
Worshipers in the synagogue pray, as do many Jews around the world, for the safety of the country and its rulers. In the UAE, Kriel’s community prays each week for God to preserve Sheikh Khalid bin Zayed al-Nahyan.
There's also a Chabad-backed outfit led by longtime Gulf resident Rabbi Levi Duchman and businessman Solly Wolf. Their organization operates a Talmud Torah Jewish day school where 45 children learn about Judaism. Duchman faced an official reprimand some months ago after launching a concerted public relations campaign introducing the new congregation but neglecting to acknowledge the existence of the city’s established but media-shy Jewish community. 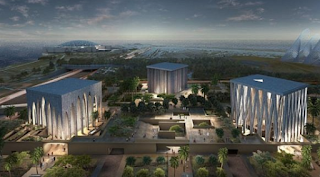 The Abrahamic family house in Abu Dhabi  will cater to the three Abrahamic faiths
Fragments of the past: The existence of an ancient Jewish community in the area upon which the United Arab Emirates now stands is poorly documented. Benjamin of Tudela, an early modern explorer, said he found a Jewish community in Kis in the modern-day emirate of Ras al-Khaimah, the northernmost of the emirates. Beyond his words, little trace of that community remains.
But records of Jewish communities in the area have not entirely vanished. Ras al-Khaimah’s National Museum stands the tombstone of one David, son of Moses, unearthed in the 1970s by local residents. The tombstone features clearly legible Hebrew writing, with some Judeo-Arabic mixed in. 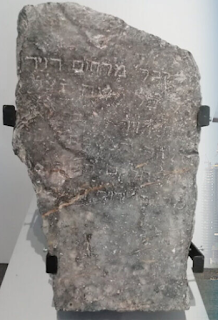 The tombstone of David, son of Moses
According to historian Timothy Power, the mysterious David may have migrated from Persia to nearby cosmopolitan Hormuz at the height of its commercial splendor, between the 14th and 16th centuries. “A notable Jewish community existed on the island of Hormuz, situated at a strategic bottleneck at the head of the Arabian Gulf, less than a day’s sail from Ras Al Khaimah,” Power wrote, adding that one source attested several synagogues and two rabbis served the community at the time.
Read article in full
Trailblazing Jews are paving the path to peace (The Media Line)
Posted by bataween at Friday, September 04, 2020