With the death of Marcelle Ezra (Cohen)  in Iraq, the number of Jews falls to four. Known affectionately by her pupils as Sitt Marcelle, she had been a teacher at the Frank Iny Jewish school. She  is believed to have been in her 90s when she passed away. Marcelle  also ran the  office administering the Jewish community's affairs. Point of No Return is reposting an interview with Sitt Marcelle which appeared on the Niqash site in 2008. 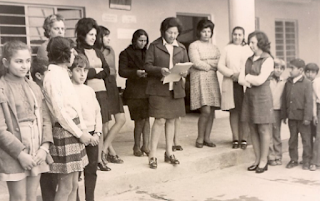 Sitt Marcelle takes the register at the Frank Iny School
"Seventy-five year old (sic) Marcel Azra, one of the few remaining Jewish women in Iraq, has nothing left but memories of the man she loved. For his sake she didn’t leave the country, only for her dreams to be shattered by his death prior to their wedding. When he died, she was left alone, one of the few Jews still in Iraq. Today, Marcel, whose face is lined with wrinkles, lives alone in her house in al-Bataween area in central Baghdad. She is frail and rarely ventures out, depending instead on a neighbouring Christian family for help with her daily needs.
"Once upon a time she was a teacher in the country’s most famous Jewish school, Franky Ain School (later renamed al-Nithamiyah School), but since retiring she has lived in solitude in her home. Marcel’s neighbours, Rami and his sister Rita, have helped her for many years. They call her ‘aunt’ and buy her needs, clean the house and look after the garden. They also cook her the Iraqi food that she so loves.
"Looking at black and white photographs from the 1950s, 60s and 70s, Marcel recalls beautiful memories of times spent with family and friends, all of whom have since died or left the country. “I have no one. All my Jewish family and relatives left the country. My brother, my sister’s sons and my friends… I stayed here alone. I thought I would marry Sahyoun and so I stayed. But fate did not give me this opportunity. Sahyoun died in an unexpected fight with a Palestinian who was living near our house.” Marcel says that the incident occurred in the early 1980s because of a dispute between Sahyoun and a Palestinian neighbor provoked by the news on television.
"The dispute led to a fight and Sahyoun ended up dead. Despite the incident, Marcel never thought of going to Israel, but insisted on staying in Iraq. “I have no reason to leave. All my neighbours know that I am Jewish and no one has ever hurt me,” she told Niqash. “I do not want to die away from the place where I was born and spent the best years of my life."
Update: an acquaintance in London says that the facts have been misreported - Marcelle was actually married to the man she loved. He was not killed in a dispute with a Palestinian, but by a bomb thrown at the Jewish Congregational offices.
Posted by bataween at Sunday, September 13, 2020