Palestinians: Jews must not pray in synagogue in an Arab country

Palestinians often like to distinguish between Jews and Zionists, saying they have no problem with the former, only the latter. So why do some figures object to Jews who wish to pray in a synagogue inside an Arab country, asks Khaled Abu Toameh in World Israel News? (This article was written before Israel and the UAE announced their historic peace deal, but nothing suggests that the Palestinian leadership has changed its tune).

The Palestinians are now saying that have a problem not only with Jews touring the Temple Mount, but with those who wish to pray inside a synagogue in an Arab country, namely the United Arab Emirates (UAE).

A multifaith complex that includes a synagogue is currently being built in Abu Dhabi, the capital of the UAE. “A church, mosque and synagogue will share a collective space for the first time, serving as a community for inter-religious dialogue and exchange, and nurturing the values of peaceful co-existence and acceptance among different beliefs, nationalities and cultures,” the committee overseeing construction of the complex said in a statement.

The prospect of Jews praying inside a synagogue in a faraway Arab country seems to worry Palestinian Muslim figures more than the killing and wounding of thousands of Muslims and Christians in last week’s huge explosion at the port of the Lebanese capital of Beirut. 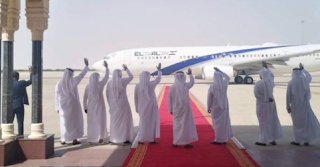 Posted by bataween at Wednesday, September 02, 2020

Email ThisBlogThis!Share to TwitterShare to FacebookShare to Pinterest
Labels: Antisemitism, Jews of Dubai and Gulf states