It was serendipity, only possible in this era of social media.
Nagi Zeidan, the historian whose book Juifs du Liban  is about to come out, was missing one last piece of information before the book went to press. He was trying to find out about the benefactor who funded the building of Beirut's Maghen Avraham synagogue in 1926.
It was  90 minutes before the port explosion on 4 August 2020 that Nagi' was put in touch with journalist and author Tim Judah via geneaologist Alain Farhi. Tim's daughter Esther Judah travelled  to Beirut for the UN agency WFP after the port exploded.
Tim's great-. great-grandfather from Calcutta funded the construction of the Beirut synagogue in 1926 (another benefactor paid for the land.) After the war all contact was lost.
Tim Judah is the son of Joseph-Vivian, son of Emmanuel Judah. Emmanuel was married to Ramah, daughter of Moise, son of Abraham Sasson. Ramah's father Moise paid for the construction of the Maghen Abraham synagogue in memory of his father Abraham Sasson, who was buried in Beirut in 1897. 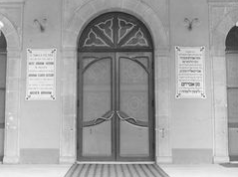 This photo, in Tim Judah's possession, shows two plaques in memory of Moise Sasson's father on either side of the front entrance to the synagogue. Esther Judah visited the synagogue on 8 September 2020 to ascertain the damage caused by the port explosion. The plaques were missing - probably stolen for their marble.
Nagi Zeidan adds:
Who was Moise, son of Abraham, son of Eliyahu Sasson?
To know who Moise was, we have to refer to his grandfather, Elyahu, son of Raphael, son of Joseph Sasson, born in Aleppo around 1819 and died there. The branch of this Sasson family is "Sasson-Ajami"  They were of Iranian origin and settled in Aleppo in the middle of the 18th century. The latter had four boys  - we know two: Abraham, born around 1840 in Aleppo; died in Beirut on March 1, 1897.
Raphaël, was born in 1842 in Aleppo and died in Singapore on September 24, 1909.
Abraham, son of Eliyahu Sasson was married to Regina, daughter of Moses Silvera. She was born in Aleppo around 1844 and buried on April 7, 1903 next to her husband in the Jewish cemetery in Beirut.
They had several boys: the eldest, Eliyahu was born in Aleppo in 1862; Moses, born in Alexandria and died in Calcutta in January 1943.
The latter married in Singapore on February 18, 1896 with his first cousin Rachel, daughter of Raphaël Sasson. She, too, was born in Singapore on December 6, 1879 and died in England on May 14, 1964.
Here is the story of Moise, son of Abraham, son of Eliyahu Sasson and his relationship with the construction of the Maghen Abraham Synagogue.
Moïse Sasson was born in Alexandria on September 18, 1867. As an adult, he decided to try his luck in Calcutta, India. He was a trader, jute exporter and landowner. He was very successful in business. He made his fortune in India.
His father Abraham and his mother Regina moved to Beirut in around 1890.
Moise met his uncle Raphael in Singapore who was residing there. There, he met his first cousin Rachel, born in Singapore on December 6, 1879. He married her on February 18, 1896 in Singapore, without his parents attending - they remained in Beirut. They had a wedding invitation written in French in Beirut drawn up for the community to bless this marriage.
Moïse's father died in Beirut on March 1, 1897 at the age of about 57 and is buried in the Jewish cemetery in Beirut.
The couple had  five children: the 1st, a daughter, Ramah, born in Calcutta on April 21, 1899 and died in London on December 3, 1989 at the age of 90.
On April 7, 1903, Moïse's mother, Regina, died in Beirut at the age of about 59. She was buried next to her husband in the Beirut cemetery under the name Régine Sasson, wife Abraham Sasson.
On September 24, 1909,  Raphael died. He was the son of Eliyahu Sasson in Singapore, the paternal uncle and stepfather of Moses, son of Abraham, son of Elyahu Sasson.
In 1912, Moses visited Jerusalem and Tel Aviv with his wife Rachel and his brother Elyahu. The latter resided in Alexandria.
It is almost certain that he made contacts at that time, with a view to building a new synagogue in Beirut, in memory of his father.
The First World War being declared, the project was put on hold.
On August 25, 1926 at 4:04 p.m., the Maghen Abraham synagogue was inaugurated.
All members of the community were present to attend the ceremony.
Beirut blast caused superficial damage to synagogue
Posted by bataween at Tuesday, September 15, 2020

it is a high security area ! because of Mr. Hariri's Residence there, so the street is not open for public..so the plaques are either stolen by the guards( which i doubt) or damaged and removed are the blast.

I think they were removed well before the blast because the synagogue did not have the plaques when its renovation was completed in 2014.