How the Banais from Shiraz became the voice of Israeli culture

The Banai family, now the subject of an exhibition in the Tower of David museum, is a phenomenon in Israel. The saga goes back to 1881, when Rahamim Bana came to Jerusalem from Shiraz, Persia, and settled outside the walls of the Old City. His son, Eliyahu Yaakov Bana, his grandchildren, and  his great-grandchildren created a legacy of talent. The Algemeiner has the story by Simone Masha. 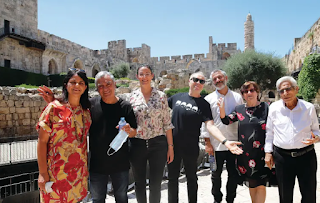 Retired judge Yitzhak Banai and his wife, Simcha, their son Eviatar Banai, music historian Yoav Kutner, exhibition curator Tal Kobo, Gavri Banai, and Eilat Lieber, museum director, pose for a photo at the Tower of David Museum. (Photo: Ricky Rachman)
Every generation of Israelis has its own Banai — sometimes more than one. Their very names — Ya’acov, Yossi, Chaim, Gavri, Yuval, Orna, Meir, Ehud, Eviatar, Uri — evoke every period of Jerusalem’s modern history, ever since the city developed from a backwater of the Ottoman Empire into the capital of the State of Israel.
“The soundtrack of my childhood was the radio comedy skits of the HaGashash HaHiver trio with Gavriel Banai, and the routines of Yossi Banai and Rivka Michaeli interspersed between Hebrew songs and classical music,” says Tal Kobo, curator of the exhibition. These skits, first composed in the early 1960s, became the iconic components of popular Israeli culture. The idioms and expressions they created have long been integrated into modern spoken Hebrew.
In the 1980s and early 1990s, the rock group Mashina took center stage. Founded by Yuval Banai, the group symbolized everything that was atypical, rebellious, and exciting at the time, with a pinch of international flavor. In the same era, Yuval’s cousin Ehud Banai offered another facet of Israeli identity, crystallized in the album “Ehud Banai and the Refugees. ”
And all the while, the radio continued to play Israeli classics — Yossi Banai singing the French chansons of Jacques Brel and Georges Brassens. By the late 1990s, it was Orna Banai who had the entire country laughing with her character “Limor” in the satirical television show Only in Israel.The late Meir Banai developed his own soulful musical style then, while Eviatar Banai can now often be heard at any nearby Zappa Music Club.
When Yossi Banai wrote, “I’m making a bridge out of memories,” he was referring to his own. But the Banai family’s creative efforts form a bridge to the collective memory of Israeli culture. Their personal family story mirrors the development of Jerusalem and the development of Israel, and the exhibition shows the coalescing of the community and Hebrew culture in the land of Israel as a process. It is the story of one family’s cultural and physical journey — how they settled outside the Old City of Jerusalem, later moving to huts on the land that is today “Yemin Moshe,” out into the new area of Nachlaot adjacent to the Machane Yehuda open-air market, and then out further afield.
And throughout this time, their artistic contributions in theater, song, and satire reflect each pivotal point in Israel’s history. “People think of me as a prince in Israel, but my grandfather sold vegetables in the Machane Yehuda market,” singer Yuval Banai remarked in an February 2019 interview with Sagi Ben-Nun Actor Uri Banai remains quite conscious of the singularity of the Banai success story across the generations.
“It is interesting how a traditional family like this — where the father is a vegetable seller, the mother a housewife with seven kids — a hardscrabble religious family, helped found the Machane Yehuda market and became the topic of some of Israel’s best trivia questions. Every crossword puzzle includes at least one of us,” he said to Adi Greenberger in an article.’This Is Our Song,’ a line from a popular song by Ehud Banai, is also the Hebrew name of the exhibition,” says Kobo. “It serves as a metaphor of how the historical story of the Banai family and the Banai opus became a common soundtrack of Israeli culture. "
Read article in full
Posted by bataween at Friday, September 11, 2020

My mother, née Rivka KATSAV, claimed that Yossi Banai was a distant relative. Both families travelled from Shiraz to settle in Jerusalem. However, it seems that our families were friends, but not related.