Seventy years this month, a daring mission to airlift 50,000 Jews from Yemen to Israel, dubbed On Eagles' wings, or Operation Magic Carpet,  came to an end. It was made possible with the bravery and heroism  of the pilots of Alaska Airlines.  They did not lose a single passenger, despite sandstorms and enemy gunfire. The last surviving crew member, Captain Elgen Long,  described the mission as the highlight of his flying career. Yanky Fachler takes up the story:

Another Alaska Airlines pilot was Robert F. Maguire Jr., the chief pilot of Operation Magic Carpet, and incidentally the son of an American judge at the Nuremberg war trials.

Maguire had enlisted in the Army Air Corps the day after Pearl Harbour.  Before becoming a pilot with Alaska Airlines, he had flown in the Pacific region during the war.

During Operation Magic Carpet, he flew between 270 and 300 hours each month, at a time when the United States limit under its aviation rules was 90 hours. Maguire relied as much on his wits as on his aviation skills.

A typical work day on Operation Magic Carpet was 16 to 20 hours long.  After unloading passengers in Tel Aviv, Maguire and his crew usually flew on to Cyprus to spend the night there because of the danger of being caught up in the fighting between Israel and its Arab neighbours.Each flight was perilous.

Fuel was scarce and sandstorms were frequent. Landing on Arab soil was to be avoided at all costs. The pilots were warned of the dire consequences if that happened.  The passengers would likely be killed.  On one trip, McGuire ran out of fuel and was forced to land on a runway in Egypt.

When airport officials rushed to the plane, the quick-thinking Maguire asked them to send ambulances immediately to take passengers to the nearest hospital.  "Why?" they asked.

He got his fuel in record speed, and flew on to Tel Aviv.

When Alaska Airlines had to withdraw after a few months into the operation, Maguire started his own company, Near East Air Transport, hiring planes and pilots from Alaska Airlines, and continued the job.

David Ben-Gurion was reported to have called Robert Maguire “the Irish Moses.” • Quite why Ben Gurion thought that Maguire was Irish is not known.  The writer Leon Uris used Maguire as a model for his fictional character Foster J. MacWilliams, the chief pilot of the fictional Artic Circle Airways, in his 1958 novel, "Exodus."

Another Uris character, “Stretch” Thompson, was based on Alaska Airlines boss James Wooten. • In 2004, Maguire was awarded a medal of valour by the Simon Wiesenthal Centre for his role in rescuing the Jews of Yemen.

Warren Metzger was a DC-4 captain with Alaska Airlines and his wife Marian was a flight attendant, when they embarked on what turned out to be one of the greatest feats in the airline’s history. "One of the things that really got to me was when we were unloading a plane at Tel Aviv," said Marian, who assisted Israeli nurses on a number of flights. "A little old lady came up to me and took the hem of my jacket and kissed it. “She was giving me a blessing for getting them home. We were the wings of eagles." 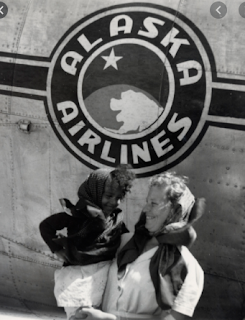 Before Operation Magic Carpet, the Metzger couple had been involved in the Berlin airlift, and helped repatriate Jews from Shanghai who had fled to China before WW2 to escape persecution in Germany.

Now that the communists had come to power in China, Alaska Airlines flew the German Jews to Israel.

Tragically, while not a single Yemenite refugee died during the rescue mission itself, some 850 Yemenite Jews had died en route to their departure points or while waiting in the transit camp in Aden.  Infant mortality rates were high, and Ben-Gurion noted in his diary that Yemenite children in the Israeli ma'abarot – the tent transit camps - were dying like flies.

As the Jerusalem Post reported on 25 September 1950, Operation Magic Carpet came to an end that evening at 10 pm at Lydda Airport.

The two aircraft which wound up the operation landed within ten minutes of each other.  Among those gathered at the airfield to meet them were the two Chief Rabbis of Israel, our own Dr Isaac Halevi Herzog and Rabbi Ben Zion Hai Uziel.  The planes parked close to each other, and health formalities were completed aboard the planes.

Some of the new arrivals on this final trip had been among the first to arrive at Aden, but had stayed on there until the end, to help with the camp arrangements.  They were greeted enthusiastically by the former camp staff with whom they had worked for many months and who had come to see them arrive.

A surprise witness to the emotional scenes at the airport was Mrs. Lorna Wingate, the widow of General Orde Wingate. Lorna had arrived from London earlier that evening, in order to attend the foundation stone ceremony of the Wingate Youth Village.  She stayed at the airport so that she could witness the Magic Carpet complete its operations.

Another Alaska Airlines pilot was Stanley “Buddy” Epstein, a Jewish Machal volunteer from the USA who served as a pilot in Air Transport Command.  Although not a religious man, Epstein said later that Operation Magic Carpet had to have been blessed by God because the possibility of any of these airplanes being successful was pretty remote.  Epstein, a pilot and maintenance specialist, contracted with Alaska Airlines to help with “Operation Magic Carpet” after having airlifted supplies from Czechoslovakia to Israel. “We flew almost continuously from Christmas Eve 1948 to nearly a year later,” said Epstein, “and never lost a life or had an injury from an accident.

“One airplane undershot the runway in Asmara, but it didn’t burn, even though it was loaded with gasoline barrels. “We had a few bullet holes.”

Epstein noted that the C-46 aircraft were carrying 76 passengers per trip – nearly 30 more than licensed for, based on the average passenger weight and the number of aircraft exits.

Epstein said at the time: “If there was a single reason felt by all of the English-speaking flight crews and other volunteers, it was a feeling of “never again” after the press and other news media dramatically revealed the stories of the Holocaust.”

Alaska Airlines president James Wooton shares his memories of the first flight in 1949.

More about the Alaska airlines airlift
Posted by bataween at Thursday, September 03, 2020