It is perhaps a sign of how far Arab states have changed  their perceptions of Jews that  the Saudi-owned news medium Arab News  has published a lengthy feature on the Jews of Lebanon. The article is honest enough to admit that the 29 Jews remaining in Lebanon are too terrified to divulge their identities.  Unlike the BBC,  it is frank enough to admit that Jews fled the Aleppo riots of 1947. Unlike the author of the only authoritative book on the subject, Jews of Lebanon by Kirsten Schulze, it does not play down antisemitism and suggest that the Jews fled the Lebanese civil war (the great majority fled at the time of the Six Day War ). The hook for the piece is the imminent publication of a book by the historian of Lebanon's Jews,  Nagi Zeidan. Zeidan  is a Lebanese Orthodox Christian who rejected his family's roots in  the Nazi-influenced Social Nationalist party. He has spent 25 years researching the history of the Jews. 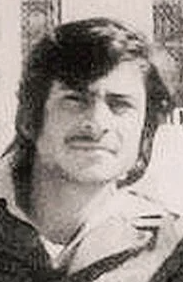 Nagi Zeidan as a young man
Historian Nagi Zeidan was a teenager growing up in Lebanon when his father, an official in the Syrian Social Nationalist Party (SSNP, which was very popular in the country at the time), sent him to initiation camps, grooming him to become a leader himself one day.
Zeidan was given books written by SSNP founder Antoun Saadeh advocating the establishment of a Syrian nation state spanning the entire Fertile Crescent. He was smitten as much by the secular anticolonial ideals as by the erudition of Saadeh, who wanted to unite people around their common history.
But the idealism of his youth was dealt a harsh blow when he came upon a sentence that changed his life forever: “We have no other enemy to fight … except the Jews.”
Questions jostled inside his young head: “Why should I subscribe to Saadeh and not befriend Jews? Abraham was born in Iraq. Doesn’t that mean that Jews are part of the Syrian Umma (community)? My father never gave me a logical answer,” Zeidan told Arab News.
“Then I met Jewish friends and found them very honest and kind. That made my inner struggle all the more intense. I grew up and the question grew with me: Why should I be against the Jews?” Very early on, his vocation was sealed: He set about researching the Jews of his country, drawing family trees from Abraham to the present day. “I was the only ‘suicidal one’ doing studies on the Jews of Lebanon,” recalled Zeidan.
He was harassed by General Security and ostracized by his family. Uncles and cousins greeted him only from a distance. Ironically, just when Zeidan began tracking the Jews down in the 1980s, the community had already left. Their presence, dating back hundreds of years, had almost come to an end.
(,,,) Nagi Zeidan tells his story to the interviewer:
"Since 1995, my research has never stopped. I spent four months immersing myself in the memories of the old Jewish cemetery in Beirut, trying to decipher the inscriptions on the stelae. I discovered epitaphs, sometimes very touching. I was particularly upset by one of them, which read: “To that person who died young.” This was for Matilda, the daughter of Moses Eleazer Greenberg, who died at the age of 39, on October 30, 1909.
Unable to bear the pain of losing her, her father died 51 days later on December 20, 1909 at the age of 69. He was buried next to his daughter. There was another young girl who died out of grief following the death of her father, and was buried next to him. 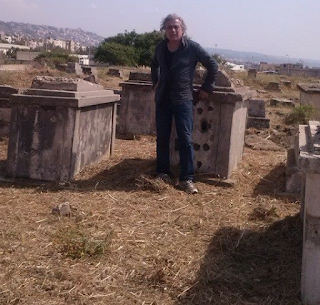 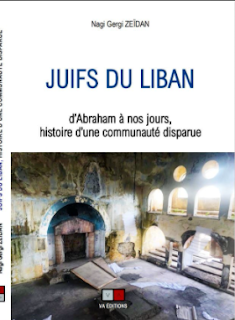 More about and from Nagi Zeidan
Posted by bataween at Monday, September 14, 2020