AFP article on Jews of Iraq paints a patchy picture

With thanks: Stan, Adam and Eran
An unsigned piece 'Iraq's Jews fled long ago, heritage struggles on',  from the French news agency AFP has received wide distribution in the world's media - for instance in the UK mass-circulation Daily Mail.
While the general tenor of the article is about exile, loss and destruction of Jewish heritage, the piece is misleading in several respects and gives a patchy picture.
Firstly, it concentrates on the erstwhile Jewish community of Kurdistan. This was never more than a minority - 18 - 25,000 Jews out of a total of 150,000, mainly concentrated in Baghdad.
A photo caption shows portraits of 'Jewish' teachers at an Erbil primary school . 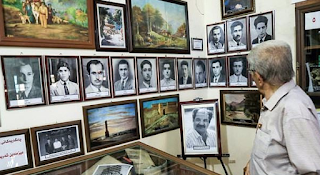 Iewish teachers in an Erbil primary school
Secondly the writer tries to give the impression that Jews still exist in Kurdistan. What there is - is a community of Benju, Kurds with Jewish ancestry, who have vague memories and nostalgia for their Jewish roots but to all intents and purposes, they are Muslims. It is not known who the Israeli Jews 'with Iraqi ID cards' who returned to Kurdistan might be - possibly these are Israelis who have been doing business in the Kurdish areas.
The article tries to blame the creation of Israel for the flight of Iraqi Jews. The 1941 Farhud, in which hundreds of Jews were murdered, is omitted, as is the rise of pro-Nazi antisemitism.
There is no mention of the post-1967 execution of 11 Jews on trumped-up spying charges, nor of the smuggling of 2,000 Iraqi Jews out of Iraq through Kurdistan in the 1970s. American troops found just 34 Jews in Iraq in 2003. Only six Jews were flown to Israel after 2003.
The writer conveys the misleading impression that Kurdish Jews converted to Judaism in the ancient 1st century kingdon of Adiabene, whereas only the rulers are known to have converted.
Concerning Jewish heritage, the article is largely accurate. It remarks that the tomb of Nahum is being restored through a $1 million grant but laments that Jewish heritage generally is in a parlous state.
It states that the house of Sasson Eskell, Iraq's Jewish finance minister in the 1920s, is partially ruined, while failing to mention that his main residence, the so-called House of Dreams, still stands.
The 'Iraqi-Jewish archive' of Jewish books and documents was not 'whisked away' from Iraq: it was shipped to the US for restoration. The writer assumes that its rightful place is back in Iraq, failing to acknowledge the strenuous efforts of Jews outside Iraq to stop the archive from going back.
Posted by bataween at Monday, September 07, 2020

Sounds like a hatchet job. I remember the picture screened on the news that related how the regimes troops tried to make a last ditch stand against American (?) troops in the flooded basement of one of Saddam's (?) palaces. There were Torah scrolls and books, the basement apart from being flooded had sewerage throughout. This was Iraqs parting gift to the Jewish people. They certainly don't deserve a return of Jewish heritage.

The Iraqi Jewish Archive can be seen online at https://ijarchive.org/
In 2018 Jews in Iraqi numbered 5-10
In 2020 No Jews listed in Internet Census Section Jewish Populations

Actually there are still five. I have it on good authority