With thanks: Ariel and Jean-Pierre

The 20th August 1955 marked two years since the sultan of Morocco, the future Mohamed V, was deposed. The period leading up to Moroccan independence in 1956 was one of great turmoil and hostility to the French, the colonial power.  According to the historian Robert Assaraf, the entire French population of 50 in Boujade was massacred; 14 French technicians working at the mines of Aït Ammar were also murdered.

The unrest spilled over against the Jews. At Oued Zem, five Jews died and six were injured, five homes were set on fire and two shops looted. In Ouezzane, demonstrations for the return of the sultan took an anti-Jewish turn and four Jews were injured, and 20 homes and shops burnt and looted. At Kenitra the Alliance school was demolished and at Boujad, an old man was killed in the street. There were even disturbances in Agadir. In Mazagan, a Jewish woman was knifed to death by an Arab rioter, the Alliance school was attacked  and 20 houses in the mellah were set on fire and looted. The entire panic-stricken population of 1,500 Jews was evacuated from the mellah the following day, and rehoused in a sports hall.

At Safi, which did not have a mellah, 12 homes were attacked and looted. Soly Azran remembers those fateful days well. His father Raphael had already gathered planks of wood and steel bars, and other material for self-defence. He and his two eldest sons had begun fortifying the house, fearing a massacre. They hammered in nails and steel joists into the front door and pushed up heavy furniture to block the entrance to the inner patio. 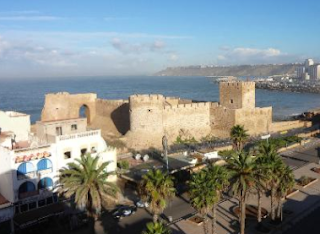 They also barricaded the windows. "My father explained to Jacky, my 11-year-old brother and myself, all of nine years old, how we should protect the girls and the baby in the house. He armed us with an iron rod and a leather belt to use on its reverse side.

As shabbat fell, our defences had been completed and we felt quite secure. Raphael was very calm but the situation was tense, precarious,  and we really feared for our lives. But my father, with his Israeli past, knew how to fight back and not necessarily panic. Child that I was, I understood he meant business against  anyone who dared approach our house."

The family observed the Sabbath at home, as it was too risky to go out to the synagogue. Outside there were screams and curses against the  French protectorate. More noise on Saturday morning as people ran this way and that. Stones were hurled at the house.Two neighbours decided to stand guard outside, until the trouble was over.

Raphael refused to open the door to the French police, who came to inform him that his shops and workshop had been burnt down. He would not go down with them to salvage what was left - it was Shabbat.

When Shabbat was out, Jacky and Soly were left proudly in charge at home while Raphael went to investigate the damage. Soly soaked his shirt with tears of relief when he heard his father returning home.

Out of the wreckage of his businesses Raphael produced from his pocket his war booty, a pair of tailor's scissors."I found my scissors," he announced." I have my hands, I'm alive,  my family is with me -and I didn't break Shabbat! We will rebuild it all!"

Soly still has the scissors.