US antisemitism tsar calls for release of Yemenite Jew 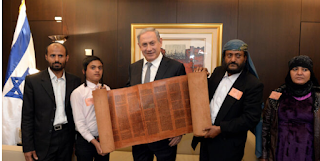 Benjamin Netanyau poses with the last members of the Yemenite community to arrive in Israel in 2016. They brought with them their family heirloom, a Torah scroll, which the Yemen authorities claim is 'national heritage.'

“The Iran-backed Houthi rebels in Yemen have a record of persecuting religious minorities. Levi Salem Musa Marhabi, a member of Yemen’s small Jewish community, has endured four years in prison despite a legal order for his release. We join in calling for his immediate release,” wrote Carr on Twitter.

According to report by Ami Magazine, “In May 2016, a group of dazed but ecstatic Yemenite Jews arrived in Israel after a long trip that was the culmination of over two years of planning. Among their possessions was a very rare deerskin Sefer Torah, claimed by some to be 800 years old. The successful aliyah of this family angered the Yemeni authorities and their Iranian backers, and a young Jewish Yemenite named Levi Marhabi was arrested on suspicion of aiding the Jews’ departure with the scroll, which they consider a ‘national Yemeni treasure."'

Read article in full
Posted by bataween at Tuesday, August 18, 2020

The Torah was given by the L-d to all Jews of every Generation.....