The mystery of the persecuted Yemenite Jews unravelled

With thanks: Nomann
Update: Russian chief rabbi  was instrumental in arranging the al-Nati family's flight (Chabad)

In July, a story surfaced in an online Egyptian medium about Houthis in northern Yemen harassing and dispossessing Jews. The case was raised with a UK government minister by the Board of Deputies.

The story was hard to believe as they are so few Jews left in Yemen. It could have been propaganda to discredit the pro-Iranian Houthis.

On 8 August, another story surfaced, about a Jewish family from Yemen who were reunited in Abu Dhabi with members of their family from London in Abu Dhabi, at the emirate's expense. The family had not seen each other for 15 years.

Who were these Jews who had just come from Yemen? And why had they flown into Abu Dhabi? 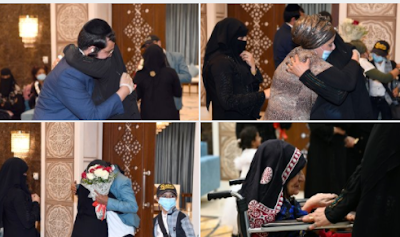 Reunion of the al-Nati family at Abu Dhabi airport


Thanks to eagle-eyed Point of No Return reader Nomann, who spotted the backstory in  the Sparabia news medium, we can now put the two halves of the story together.

Saeed al-Nati, his disabled mother and three daughters lived in Amram in northern Yemen. The Houthis, who had  invaded the area in  2004, began to harass Saaed in order to make him leave.

He was jailed  in May for one month, but was released after committing to sell his home.  He and his family left for the capital Sana'a, where 33 Jews live in a compound, and then on to Aden, where he hoped to catch a flight out of the country.

Saaed was told that there were no flights out of the country because of the coronavirus  crisis. In any case, he was told that the only country that would take him would be Israel, as Yemeni passport holders  could not obtain a visa for any other Arab country.

Enter Abu Dhabi to the rescue. Photos clearly show the disabled mother in a wheelchair and Saeed's sons, wives and grandchildren from London embracing their sisters. Mindful of the impending announcing of the UAE peace deal with Israel, Abu Dhabi must have seen a golden photo-op to advertise the emirate's tolerance and pluralism.

According to the Sparabia report, the departure of the al-Nati family leaves just five Jews  - an old woman, her crazed brother and three others - in Amram province, where the market was once dominated by Jews. Together with the 33 Jews still in San'a that makes a total of 38 Jews in Yemen altogether.

Violence in Amran  made the remaining Jews leave in waves. In 2016, 17 members of one family arrived in Israel in a blaze of publicity carrying a Torah scroll which they claimed was a family heirloom.

The Houthis arrested two Jews and two Muslims for facilitating the smuggling of a 'national' treasure. One Jew was released  after three months, but they kept the other, Levi Salem Musa Marhabi, in jail.

A court of first instance acquitted Levi Marhabi and the Muslims, but eighteen months later, Levi Marhabi is still in jail.

Marbahi suffered a stroke that caused paralysis in half his body. His deteriorating health prompted Elan Carr, US antisemitism tsar, to appeal for his release.

Nevertheless, the Houthi-run prosecution has refused to accept all the guarantees provided to them for his release until such time as the case is heard by the Court of Appeal.

All sorts of figures are bandied about. You have already established that there are no more than 38 Jews left. Have the 33 Jews in San'a agreed to leave? There is a lot of vague reporting and misinformation.

Bibi Bibi..the only good the UAE has ever done for israel..is being a waystation for Jews fleeing Yemen...dont let them settle in UAE...let them go up to Israel....

I don't think they will stay in the UAE. They have nothing in common with the existing 'community'