A tug-of-war between the Syrian Jewish communities and the Israeli government has long been waged over the the precious medieval bibles or Codices rescued from  Aleppo and Damascus. According to the Jerusalem Post, an Israeli court has now ruled that the Damascus keter, or crown, is a ' treasure of the Jewish people' and belongs in The Israel National Library. It may be argued that this is the best place for it, as the Syrian Jewish community is dispersed between Israel and the diaspora. 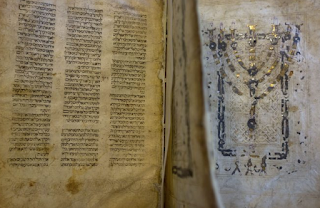 A quarter century after Israeli spies, a Canadian activist and a Syrian rabbi smuggled nine rare medieval Jewish manuscripts out of Damascus, an Israeli court decided the books will remain under the National Library’s custodianship for their preservation.

The decision ends a protracted legal battle over the ownership of the Damascus Crowns, illuminated Bibles written on parchment that belonged to the Syrian capital’s Jewish community for centuries until they were secreted to Israel in the 1990s.

The Jerusalem District Court ruled Monday the books were “treasures of the Jewish people” that had “historic, religious and national importance” and must be preserved. The best way to do so would be to keep them at the National Library under a public trust, it ruled.

A window on the murky world of the Aleppo Codex
Posted by bataween at Wednesday, August 19, 2020