Rogen's rant gets a response centred on Mizrahi refugees

At last, some effective push-back to the Eurocentric naivety of the Canadian actor Seth Rogen, who caused outrage when as a teenager, he claimed he had been fed lies about Israel . JIMENA executive director Sarah Levin's op-ed not only puts the narrative of the Mizrahi refugees front and centre, but shows that Newsweek is willing to give a platform to views not often aired in other mainstream media. 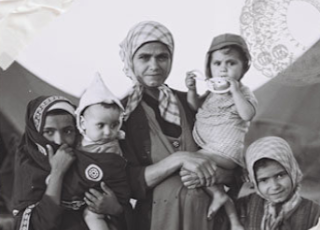 Yemenite Jews on their way to Israel

The creation of modern-day Israel provided a democratic safe haven for Middle Eastern and North Africa Jewish refugees to rebuild their lives as a decolonized people free from the oppressive anti-Semitism they were subjected to for millennia in lands throughout the region.

Today, Israel is an ethnically, religiously and racially diverse center of democracy in the Middle East that continues to welcome Jews fleeing anti-Semitism in countries throughout the world, including the United States. Rogen claims that he was never told that "other people" lived in Israel prior to its formation. It is disappointing that he and so many others are unaware that the Middle East is one of the most ethnically and religiously diverse corners of the world, and that Jews are an integral thread in the tapestry of ethnic groups native to the region.

The majority of Israeli Jews are Middle Eastern in origin and their ancestors never left the region. What's most problematic about Rogen's comments isn't his distortion of facts, or the carelessness with which he spoke—he's a comedian after all. Rather, it is that his perspective exemplifies an overarching failure of institutions—from the UN to the media to the academy—to tell the true story of the Jewish state.

Although far from a perfect country, Israel is the most successful vehicle in modern Jewish history for keeping Jews alive. After 2,500 years of wandering, it is too bad that so many so quickly forget what life was like for our persecuted people in a world without a state of our own.

Read article in full
Posted by bataween at Sunday, August 09, 2020

Just read the entire article. I'll just be honest here and say that I was also fed the same amount of lies about israel as Rogen. I just bothered to check out the facts later on. OF COURSE there were other people living in palestine when the first zionist immigrants arrived. The immigrants found Arabs, and they found Jews/Israelites (whom the zionists refuse(d) to acknowledge). I'll just assume that the author is a zionist so I would expect her to mention nothing about those Jews/Israelites that have lived in the country since time immemorial. so basically the article only confirms what Seth Rogen has said.