Following on from the bombshell news that the United Arab Emirates are to sign a peace agreeement with Israel, it would be a PR coup if the UAE were to show that is is a more congenial place to live for Jews than Israel, as this (unconfirmed) report in the Jerusalem Post infers: 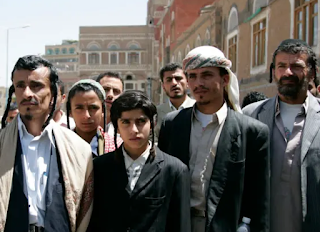 Yemen Jews demonstrating in the capital Sana'a in 2009

Yemen’s remaining Jews plan to immigrate to Abu Dhabi following the peace deal between the United Arab Emirates and Israel, Al-Araby Al-Jadeed reported over the weekend.

The plan is to transfer 100 Jews to Abu Dhabi, a Yemeni rabbi told the pan-Arab media outlet headquartered in London, although past estimates placed the Jewish population in Yemen at about 50 people.

In 2017, Yemeni Information Minister Moammer al-Iryani said the state of the 50 or so remaining Jews in the country was unknown.

The report was unconfirmed by any official source.

In July, Iranian-backed Houthis were said to be rounding up Yemeni Jews and pressuring them to leave, according to Egyptian reports. The Foreign Ministry denied the reports, as did Yemeni and international sources.

Some 40 Yemeni Jews have agreed to move to the UAE, and others are being persuaded to move by being told that they will not have any trouble integrating into Emirati society, Al-Araby reported, adding that the US government is said to have requested the move.

Jews dont stay in UAE permanently...Please go up to Israel