NY Times features artist with a longing for Iraq

It might not be art, but it's a good stunt. Long feature in the New York Times capturing the nostalgia of one American artist with Iraq-Jewish roots for a country where he has never been. Michael Rakowitz made an artwork called Return out of his grandfather Nissim Daoud's import-export business.

The American-led invasion of Iraq, in 2003, had a momentous effect on him. “I was split down the middle,” he told me. “The place that my grandparents had fled from was being bombed by the place that they had fled to.”

As coalition bombs fell on Baghdad, he recalled his teen-age experience of the 1991 Gulf War—how, during a run of CNN programming, his mother, Yvonne, had remarked, “You know, there are no Iraqi restaurants in New York.” The comment stuck. In 2001, during the invasion of Afghanistan, New Yorkers had showed solidarity by lining up at an Afghan café called Khyber Pass; at the onset of the Iraq War, two years later, there was no comparable place to go. This absence seemed to touch on a deeper cultural invisibility—one that had made it easier to initiate the attack and harder to heal its wounds. 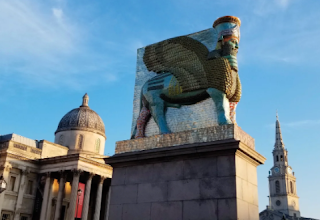 In response, Rakowitz enlisted Yvonne and launched his first culinary intervention, “Enemy Kitchen,” cooking Iraqi dishes and teaching recipes. The more he explored Iraq as a subject, the more his art drew on his associations with it. The following year, he and Yvonne had a series of intense conversations about his grandfather. Nissim Daoud had died when Rakowitz was young, but the two shared a deep bond. “They were like one heartbeat,” Yvonne recalled. Rakowitz’s first playthings were Daoud’s worry beads; when he was a teen-ager, his mother gave them to him, along with Daoud’s electric razor. “His hairs were in there,” Rakowitz told me. “I was breathless. It was an instant memorial.

When Rakowitz reopened Daoud’s import-export company, in 2004, he was interested in the human dimensions of trade with a war-torn society. “I wanted to show how a system worked, but I didn’t feel like I needed to be an objective, disembodied voice,” he said. His title, “Return,” hinted at a personal yearning. The items he shipped had, like him, never been in Iraq; could one think of them going back?

“Return,” which began as a rented mailbox in Queens, grew into a career-defining project. One day in 2006, Rakowitz was in Brooklyn, shopping in Sahadi’s, the grocery on Atlantic Avenue where his grandparents had shopped, when he encountered a can labelled “Second House Products Date Syrup.”

He was intrigued. His grandfather had made date syrup with a mortar and pestle; later, his children bought it imported. When Rakowitz took the can to the register, Charlie Sahadi told him, “Your mother’s going to love this. It’s from Baghdad.” Rakowitz looked at the label: “Product of Lebanon.” Baffled, he asked how that could be, and Sahadi explained that it was a marketing deception, begun before the 2003 invasion, to circumvent sanctions.

Dates—once Iraq’s second-largest export—were smuggled across the border, labelled, then shipped onward. After Saddam’s fall, the practice continued amid wartime restrictions. Rakowitz wondered if he could use his grandfather’s company to import the dates and sell them with their identity unmasked. The fact that Iraq had a barely functional government and was mired in war only made the idea more alluring; the shipment would have to overcome the obstacles that people faced.

He returned to Sahadi’s, seeking advice.

Samantha Ellis: You can't take Baghdad out of the girl