In the wake of reports that Morocco might be next to make a peace accord with Israel following the momentous announcemnent of peace with the UAE, the Moroccan prime minister has moved to scotch the rumours, according to this i24 News report. US secretary of state Mike Pompeo is due to visit the region. 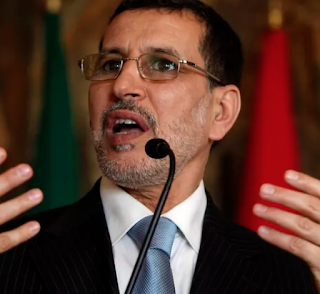 Moroccan Prime Minister Saad Dine El Otmani on Sunday rejected the prospect of normalizing ties with Israel, shooting down rumors his state would be one of the next to ink an agreement with Jerusalem.

“We refuse any normalization with the Zionist entity because this emboldens it to go further in breaching the rights of the Palestinian people,”

El Otmani told his Islamist PJD party as cited by Reuters. Morocco has been one of the Arab nations rumored to normalize relations with Jerusalem, following the United Arab Emirates’ (UAE) steps.

“Both states have extensive tourism, and trade and economic relations,” an unnamed UAE advisor told Hebrew-language daily Israel Hayom after the Israel-UAE deal was announced.

Read article in full
Posted by bataween at Wednesday, August 26, 2020