Let US Jews reclaim their identity as 'people of colour'

As a child in the Far East, Rachel Wahba tried to 'pray her brown' skin colour away - until she got to the US where 'brown' was acceptable. But Jews in the US are being miscategorised as white, when they are really people of colour, she argues in this Times of Israel blog: 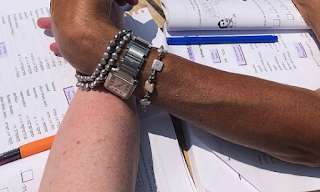 On arrival in the US, Rachel Wahba became proud of her 'tan'

Jew was never an issue for me, being stateless, it was the only national identity I had. It was the devalued skin color that occupied me. Jews who haven’t had issues with skin color but have internalized antisemitism can grow out of it too. How others see you, how color is reflected in movies, magazines, that old “skin color” crayon, the compliments, the insults–on the street, in the home–over and over again–it matters. It gets internalized. The degree of misery it causes colonizes your brain. It did mine.

When the scenery changed, I began to heal. Reading Malcolm X on skin color, (despite his unexamined antisemitism), went deep into my consciousness. If he could be a proud Black man owning and loving his color, I could outgrow my internalized racism and become whole — as comfortable with my color as I was being a Jew.

Ancient Jewish communities from all over the Middle East and North Africa have been driven out, targets of pogroms, persecution, and most recently, ethnic cleansing. You won’t find Iraqi or Egyptian Jews in my parents native lands today. Jews have participated in their miscategorization as “White” in the United States.

The unfortunate collusion of Jews thinking themselves White and allowed to be White (until they aren’t, as in Germany), with the ongoing refusal by the world at large to understand us as a People (antisemitism), is intensely problematic. Let’s make the time to decolonize our brains and reclaim our identity.

More by, and about, Rachel Wahba
Posted by bataween at Sunday, August 02, 2020