Update (with thanks Lily): The Lebanese Jewish Community Council has published this photo of the Maghen Avraham synagogue following the massive explosion the Beirut port area a mile away. But beyond dust and debris, the photo does not seem to show any extensive damage. It is not clear if the windows were blown out. Full report in the Times of Israel. 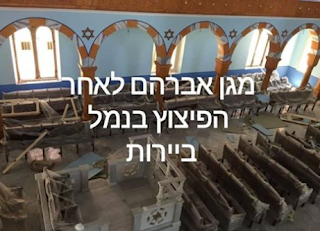 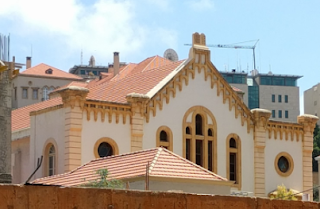 The massive blast that devastated the port area of Beirut  appears to have done extensive damage to the city's synagogue, Maghen Avraham, according to one source.

Although Lebanon  no longer has a Jewish community to speak of, the synagogue was restored and reopened in 2015. It has yet to hold a service.

It was in 2008 that Isaac Arazi, the leader of Lebanon’s Jewish Community Council, first initiated a project to restore the synagogue, which was bombed during the Lebanese civil war. The Lebanese Jewish diaspora -- including the Safras, a prominent banking family -- led the fundraising drive. Non-Jewish Lebanese also made contributions. Solidere SAL, a real estate firm set up by the Hariris, a Sunni family prominently involved in politics, pledged $150,000, an amount it also offered to other religious groups restoring places of worship in the area. In total, the restoration cost between $4 million and $5 million.

Point of No Return will update this post as soon as more details of the damage suffered by the synagogue are known.
Posted by bataween at Wednesday, August 05, 2020