The rival Iraqi-Jewish dynasties who opened up China

A new book by Jonathan Kaufman explores the story of two rival,   intertwined Iraqi-Jewish entrepreneurial families, the Sassoons and the Kadoories, who opened up China to the world. It is interesting that David Sassoon, the founder of the Sassoon dynasty, was forced to leave Iraq by Ottoman harassment. Extract from Tzach Yoked's Haaretz article: 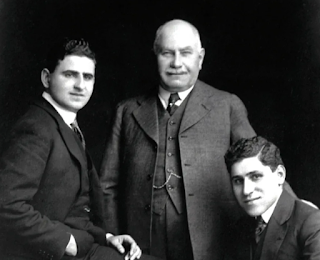 Sir Elly Kadoorie with his sons Lawrence (left) and Horace

The story begins with the Sassoons, an aristocratic family that lived in Baghdad for 800 years and was one of its wealthiest families.

Because of its social, political and economic status, which extended well beyond the bounds of the Jewish community, the head of the family was granted the title “Nasi” – a Hebrew honorific meaning “Prince of the Jews” – by the Ottoman Empire. “In the 18th century, Baghdad was a crossroads of trade, people were coming from all over the Middle East, even from China,” Kaufman tells Haaretz in a recent phone interview from his home, outside Boston.

“And all these people would pass through the Sassoons’ house, because they knew they were the most important traders in Baghdad.” But hundreds of years of economic success and social integration came to an end one morning in 1829. David Sassoon, who was 37 and had been groomed from childhood to inherit leadership of the family empire, was kidnapped and jailed by the Ottoman authorities in Baghdad. They threatened to hang him if the family did not pay a high ransom for his release.

“Desperate for money to boost a collapsing economy, the Turks began harassing and imprisoning the Sassoons and other wealthy Jews, demanding ransom,” Kaufman writes.  The harassment dealt a devastating blow to the family. The Sassoons lost their wealth and influence and decided to leave everything and start anew, elsewhere. David Sassoon believed in the integrity and decency of the British, Kaufman notes, and after his family ransomed him, he decided to move with his wife and eight children to Bombay (today Mumbai), where the British were opening up trade routes. Other Jews followed suit.

Sassoon became an Anglophile, studying British history, hiring a tutor to teach his children English and even arranging for the text of “God Save the Queen” to be translated into his native Judeo-Arabic – Arabic written in Hebrew script.

Read article in full
Posted by bataween at Tuesday, July 21, 2020

Email ThisBlogThis!Share to TwitterShare to FacebookShare to Pinterest
Labels: Jews of Iraq, Jews of China