This week falls the saddest day on the Jewish calendar, when Jews mourn the destruction of the Temples in Jerusalem and other catastrophes, such as the Expulsion from Spain. It is customary not to eat meat, drink wine, cut hair or listen to live music. Here is a recipe for Tish b'Ab Lentil Soup, courtesy of Dafina,  by Moroccan-born chef Soly Anidjar, who now lives in Ashdod.

The custom of Tisha B' Ab is to consume a dish of lentil as a sign of mourning for all the misfortunes that have happened on that day for generations. The 9th of Av has indeed become the symbol of the misfortunes of the Jewish people and it is true that at all times, dramatic events  - such as the Expulsion from Spain - have marked the history of the Jewish people on the 9th of the month of Ab. 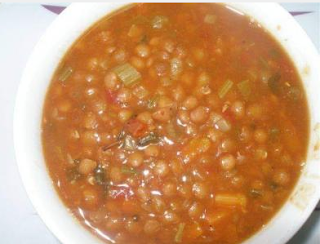 Rinse the lentils well. Heat the oil in a casserole dish and sauté the onion for two minutes. Add to the casserole all the vegetables,  then the diced pumpkin, the lentils, turmeric, salt, pepper, bay leaves.