The emptying of Iraq of its Jews is not a subject that Kurds wish to shy away from. It is the focus of this article by Holly Johnston in the Kurdish  news medium Rudaw English.

ERBIL, Kurdistan Region — Bertha Bekhor was 15 years old when a man knocked frantically at the door of her Baghdad home, on a warm June evening in 1941. Violence was sweeping across Iraq's capital, targeted at one group – the Jews.

"A man came to the house, banging on the door to be let in. He was a Jew, and was pale and trembling. He said he'd been on a bus and rioters began pulling Jews off the bus. He told them he was a Christian and ran as fast as his legs could carry him," Bertha’s daughter Lyn Julius told Rudaw English. The experience left Bertha’s family "traumatised", her father applying for passports the very next day so that they could leave the country they called home. 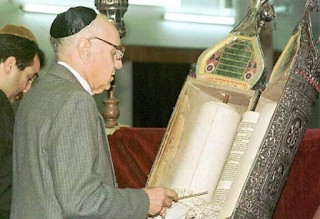 A 1998 service in the last functioning synagogue in Baghdad, Meir Tweg.

The Farhud, Arabic for 'to dispose of something with violence,' saw upwards of 100 Jewish people killed on the first two days of June 1941, in bloody mob brutality that "broke the trust" between the Jews – then numbering up to 150,000 – and Iraq’s Muslim majority. Violence targeted at Iraq’s Jewish community by no means began with the Farhud.

Bertha, now 94, told her daughter of "frequent disturbances" throughout her childhood – including being hid from mobs brandishing tarred clubs on an anniversary of the 1917 Balfour Declaration, a British government statement declaring support for a national homeland for the Jews in Palestine.

But the Farhud did kickstart a new, deadlier wave of anti-Semitic violence that would see the country virtually emptied of its Jewish community by the end of the twentieth century. Bertha and her husband fled Iraq in 1950 for the United Kingdom, where Lyn was born and raised.

Lyn now runs Harif – an organization dedicated to educating people about the struggle of Jews from the Middle East and North Africa, where Jewish communities are all but extinct in most countries across the region. Bertha “was happy to leave, although it was very hard for her," Lyn told Rudaw English via telephone. "I've often asked her about it, and she has no nostalgia at all.”

Read article in full
Posted by bataween at Monday, July 20, 2020

No, there are five. We know them all by name