They may now be in disarray, but historically, Jewish organisations such as the Joint Distribution Committee were crucial, if unacknowledged, partners in facilitating and  bankrolling the smuggling of Jews via Iran, and later, the massive airlift transporting  Iraqi Jews to Israel in 1950 -1, Shulamit Binah  claims in  her Times of Israel blog: 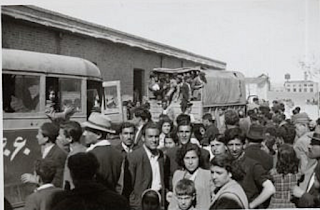 They facilitated the operation through diplomacy, political connections, and media attention as well as financial support and care to Iraqi Jewish refugees. The AJC led the diplomatic effort vis-à-vis the State Department, the United Nations, and the American media. They were well aware of the furious reactions of the Arab world to the Declaration of Independence of the state of Israel and defined the local Jews as enemies, spies, and agents provocateurs.

The AJC worked in accordance with the newly formed Israeli state institution. Led by Foreign minister Moshe Sharett and through the Israeli Embassy in Washington and the Mission to the UN in New York, Israel was trying to utilize the ongoing US-UK negotiations over the issue of providing technical and military assistance to Iraq, which, seemingly, could provide a useful inroad into the Baghdad government.

There was a lot of humanitarian work to be done in Iran as well. Since Iraq did not allow American NGOs’ presence within its borders, the JDC was operating from Iran using its long experience with displaced refugees.  Until the beginning of direct flights from Baghdad in the “Ezra and Nehemiah” operation, Iraqi Jews fled illegally to Iran, taking the risk of arrests, abuse, and even murder. In most cases, they bribed their way through Kurdistan and arrived to Iran practically penniless.

The JDC had already been busy assisting some 8,000 Iraqi Jews who fled illegally to Iran; they helped to secure Iranian permits; they addressed local animosities and arranged the Israel-bound flights. JDC set a “transit camp” in the old Jewish cemetery, called ironically Beheshti (Eden, in Farsi). Stanley Abramowitch, the JDC Iran country director, described a grim picture of crowded communities with health and sanitation issues and stressed the urgent need for funds and relief.

In late 1949 through January 1950, he sent detailed requests for funding beyond the ongoing expenditure. Those additional funds were to be earmarked for accommodation, basic equipment such as beds and blankets, dispensary water installations, and stoves in preparation for the harsh Iranian winter.

Read article in full
Posted by bataween at Sunday, July 26, 2020

Would such a thing even be possible these days?

Pity the article doesn't delve into the cause.