Israel should build on changing Arab attitudes to Jews

In the wake of the Ramadan screening of Umm Haroun, the TV series which projects a more sympathetic view of Jews, Israel should build on the warming relations with Gulf states and Saudi Arabia to advance dialogue and the peace process with the Palestinians, argues Ksenia Svetlova in the Jerusalem Post: (with thanks: Beatrice) 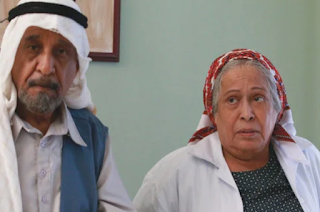 A screenshot from Umm Haroun

Saudi Arabia’s latest binge-worthy television series has an unlikely subject: Umm Haroun, produced for the month of Ramadan, depicts life in the Jewish community of Kuwait in the 1940s. It is far from coincidental that the show is aired on the Saudi MBC channel, flying in the face of harsh Boycott, Divestment and Sanctions campaigns and radical Islamic criticism. Arab and Muslim states’ interests in Judaism and the Jews has been growing quietly for around a decade. The gradual rapprochement can be seen in official meetings and rabbis’ visits to Arab capitals; the restoration, renovation and establishment of synagogues in Egypt, Morocco and Dubai; messages of reconciliation from Arab leaders; moderate legislation in several states; positive remarks by senior Muslim clerics and even, as Umm Haroun demonstrates, in literary and cinematic endeavors.

The changing tides are inherently linked to sweeping geopolitical developments in the Middle East throughout the past two decades, from 9/11 and the US invasion of Iraq, to the Arab Spring and the ascent of Iran. Since 1948, Arab regimes have officially sought to distinguish between Jews and the State of Israel, preempting Israel and the West’s accusations of antisemitism. Yet, their artificial distinction did not prevent them turning on their Jewish residents, expropriating their property, excluding them from public life and ultimately expelling them. Thus although the official line of Arab regimes always targeted the State of Israel and the Zionist movement, it appeared that 1,400 years of Muslim-Jewish and Arab-Jewish co-existence had ended abruptly. From Egyptian and Syrian caricaturists depicting Jews as malicious parasites to Saudi Arabian stores banning ‘dogs and Jews,’ relations were far from warm.