If the two-state solution is no longer the preferred answer to the Middle East conflict, what is?  Whether you agree or not with his proferred solutions for the Palestinians of the West Bank, this clear-sighted Newsweek op-ed by Yishai Fleischer is a refreshing attempt to give much-needed context to the debate. 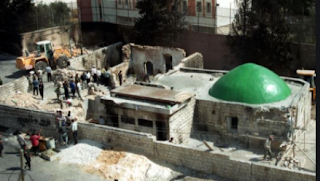 Joseph's tomb near Nablus, restored after an arson attack


To answer the question, let's zoom out.

The heavily-Islamic Middle East and North Africa is a large region: six million square miles, twice the size of the continental United States. It is inhabited by 570 million Muslims (406 million Arabs, 82 million Turks and 82 million Iranians) across over 20 states. Within this region, there are a few tiny islands of independent non-Arab entities. One example is the Autonomous Kurdish Region in northern Iraq, with a population of five million. The Kurds, while mostly Muslim, live in constant tensions with their neighbors, who would love to swallow up their land.

Similarly, there is another small non-Arab group living in a regional enclave: the Jews. About seven million Jews populate an independent ethnic-national state called Israel. This Jewish state is located in the heart of the Arab world and is the size of the state of New Jersey—only one-sixth of one percent of the Muslim world's sprawling landmass.

American progressives cast Israel as a powerful Western giant, accusing it of denying rights to Palestinians. But that image is warped. The truth is that Israel is a tiny country tasked with defending a persecuted minority. Jews have no rights in the neighboring Arab states and, in fact, have been ethnically cleansed from those states. After Israel declared independence in 1948, 99 percent of Middle Eastern Jews—850,000 people—were purged from the Arab countries.

Like the hostile Arab countries, the Palestinian movement, in its various iterations, has always been a machine for ethnically cleansing Jews. In 1929, they ethnically cleansed the Jews of Hebron, and in 1948, they did the same to the Old City of Jerusalem and Gush Etzion. In 2000, they evicted the Jews from the Tomb of Joseph in Shechem/Nablus and destroyed it.

Beinart's idea of a bi-national Israel-Palestine, whose democratically elected Arab leaders would certainly work to undermine Jewish defenses from within, would defeat the whole purpose of the independent Jewish state in the first instance.

Anti-Zionists want Jews to revert to being dhimmis
Posted by bataween at Sunday, July 19, 2020