It is 40 years since a Jewish hairdresser, Nosrat Goel Tali'i, was executed by the Iranian regime on charges of running a prostitution ring and drugs trafficking in Shiraz. The victim was mistaken for a prostitute named Zahra who managed to buy her freedom with a huge bribe. Nosrat was convicted on the say-so of a revolutionary guard. Here is her story according to the Abdorrahman Bouroumand Centre, a watchdog  monitoring human rights violations in Iran (With thanks: Karmel) : 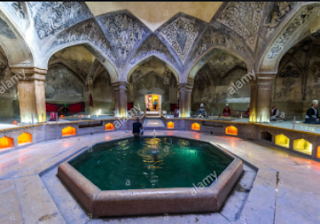 On the afternoon of July 3, 1980, Ayatollah Khalkhali, the religious judge and head of the Special Islamic Revolutionary Court, tried Mrs. Goel Tali’i and 23 others at the same time at the Islamic Revolutionary Guards Headquarters in Shiraz. According to available reports, the proceedings continued until 11:00 PM, and all sentences were implemented by 12:00 PM (Akhbar-e Ruz website).

The trial court for all 24 defendants lasted about nine hours, and this session was held without the presence of a lawyer and without defendants being able to access judicial records (Mohsen Kadivar website). Charges Official newspapers cited different charges for Mrs. Goel Tali’i. The Jomhury-e Eslami newspaper counted “operating an opium den and drug trafficking” as Mrs. Goel Tali’i’s charges. Meanwhile, charges reported by Ettela’at newspaper were “corrupting girls and selling them to men”, and in the Kayhan newspaper “operating house of debauchery and drug trafficking” (Mohsen Kadivar website quoting Ettela’at newspaper, July 5, 1980, page 3 and Kayhan newspaper, July 5, 1980, the last page).

The validity of the criminal charges brought against these defendants cannot be ascertained in the absence of the basic guarantees of a fair trial. International human rights organizations have drawn attention to reports indicating that Islamic Republic authorities have brought trumped-up charges against their political opponents and executed them for alleged drug trafficking, sexual, and other criminal offences.

Each year Iranian authorities sentence to death hundreds of alleged common criminals, following judicial processes that fail to meet international standards. The exact number of people convicted based on trumped-up charges is unknown. “Statements made by one of the Revolutionary Guards against her” were used as the sole evidence to prove Mrs. Goel Tali’i’s charge.

According to the former commander of the Revolutionary Guards in Shiraz, the religious judge thought that the guards arrested a certain Mrs. Zahra, and asked Mrs. Goel Tali’i: “[Are you] Zahra? Mrs. Goel replied: “I am not Zahra, I am Nosrat Goel. Who is Zahra?”
Mr. Khalkhali said: “[You can] go.”

When Mrs. Goel Tali’i wanted to go, one of the guards whispered to Khalkhali that she herself made prostitutes available by phone [i.e. operated a den of corruption]. Khalkhali told her to come back right away and executed her immediately.” (Akhbar-e Ruz website). Defense Based on available information, Mrs. Goel Tali’i was arrested and tried in someone else’s place. According to the former commander of the Revolutionary Guard in Shiraz, “a prostitute in Shiraz named Zahra was arrested, gave a bribe of one million [tomans] and was released".

The guards’ officers reported the matter to Khalkhali. Khalkhali ordered that she be brought back. The officers went to bring Zahra, but could not find her: either she was hiding or gone. The officers knew it was a bad thing not to be able to find her. So, they went to a hair salon and took this woman [Mrs. Goel Tali’i] and told Kalkhali that she was Zahra” (Akhbar-e Ruz website).

Mrs. Goel Tali’i’s so-called trial was held immediately after her arrest and did not comply with the minimum principles of procedure. No information is available on whether public prosecutors were present, whether an indictment was brought against her at the trial, and whether Mrs. Goel Tali’i was granted the opportunity to defend herself.

On July 3, 1980, Ayatollah Khalkhali, the religious judge and head of the Special Islamic Revolutionary Court, sentenced Mrs. Nosrat Goel (Koel) Tali’i to death and confiscation of property. The sentence was implemented immediately. About 12 PM on July 3, 1980, Mrs. Nosrat Goel (Koel) Tali’i was executed along with 13 other people by firing squad in the Revolutionary Guards camp in Shiraz (Jomhury-e Eslami newspaper, Akhbar-e Ruz website, Mohsen Kadivar website, quoting Ettela’at newspaper, July 5, 1980, page 3). According to available information, Mrs. Goel Tali’i was pregnant at the time of the execution. Mrs. Goel Tali’i’s body was delivered to her family several hours after the execution. The Shiraz Jewish community arranged a remarkable funeral for Mrs. Goel Tali’i (Mohsen Kadivar website).