How Kurdish Jews made their way to Jerusalem

Fascinating article in the Times of Israel by Shmuel and Aviva Bar-Am about the origins of the Jerusalem quarter of Nahlaot, founded by Kurdish Jews at the turn of the last century. The  advent of Kurdish Jews  to Jerusalem confirms  that Jews from the East - from Yemen, Syria, Kurdistan, Turkey, Bukhara, Persia -  settled in Eretz Yisrael  around the same time, or even before, the first aliya of Russian Jews (with thanks: Lily). 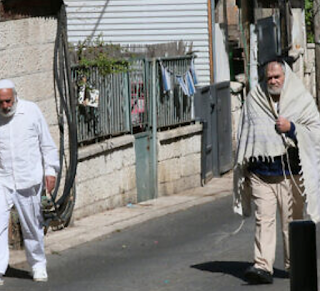 Barashi Street, Nahlaot - named after a Kurdish Jew who fought in the Israeli war of independence

What kind of rocks do you need for making fire? At the end of the First World War, a group of English geologists thought that they could find the perfect blend of flint and steel in the rocks of Zacho, a town in Kurdistan. Off they went to the East and, while digging in the ground for rocks, they ran into a group of Jews.

Excited, they wondered if the Jews were acquainted with Chaim Weizmann, celebrated in England for having been crucial to the war effort. And they asked what the Jews thought about the 1917 Balfour Declaration, in which the British government expressed support for the establishment of a “national home for the Jewish people” in Palestine.

To the shock of the Brits, the Jews of Zacho had no idea what they were talking about. For like most Jews in Kurdistan, they lived a simple life in a close-knit ethnic community, isolated from the outside world and completely ignorant of world affairs. Each day they woke up, prayed, and worked the land.

And the next day they did it all over again. Nevertheless, the questions asked by the British geologists had piqued their interest. They began writing to Jews in England and in Palestine. And eventually this chance encounter between Kurdish peasants and British geologists would be one of the driving forces behind a mass immigration to the Holy Land.

These days among the choicest residential areas in Jerusalem, Nahlaot consists of several dozen tiny quarters clustered together outside the walls of the Old City. Occupants of each little quarter generally belonged to a specific ethnic group with shared geographical connections, similar styles of worship, and common traditions. In those early years and until the middle of the 20th century, it was populated with immigrants from Kurdistan, Yemen, Iran, Syria, Jews from Urfa in southern Turkey known as Urfalim, and a very small number of newcomers from Eastern Europe.

Inhabitants of Shaarei Rahamim, the poorest of them all, lived in tents, or large empty gasoline cans covered with tin. Conditions were terrible, with kitchens in the yard along with outhouses, and sewage running through the streets. Yet the Kurds knew that this was only a matter of time until they would manage to build more permanent housing.

Read article in full
Posted by bataween at Monday, July 13, 2020