As relations continue to warm up between the Gulf states and Israel, the Gulf's first kosher restaurant  has opened in Dubai. First reported in the pro-western Al-Arabiya,  it has been opened by a long-time Israeli resident of Dubai, Elli Kriel. Al-Jazeera has also picked up the story. (With thanks: Olivia) 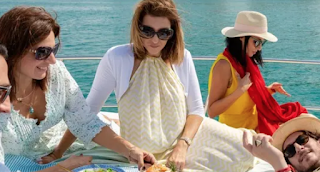 As prominent Jewish leaders from around the world arrived in the UAE for interfaith events during the official Year of Tolerance last year, they sought kosher meals - food that follows traditional Jewish dietary laws.

Longtime Dubai resident Elli Kriel, who provided kosher food to Jewish travelers informally over the years, noticed an increase in requests in the run-up to the Year of Tolerance and saw an opportunity.

“I realized there was an opportunity to do more and in a very adventurous moment, I decided to take the plunge,” Kriel said in an interview with Al Arabiya English. “The simultaneous recognition of our community also bolstered my confidence. I don’t think I would have done it before then,” she added.

Two more events affirmed Elli’s decision. In May, Rabbi Yehuda Sarna, a chaplain at New York University, was appointed by the Jewish Community of the Emirates as its first Chief Rabbi. In September, the UAE announced the construction of an interfaith complex in the capital Abu Dhabi that will house a Jewish synagogue, Christian church, and Islamic mosque.


Read article in full
Posted by bataween at Thursday, July 16, 2020